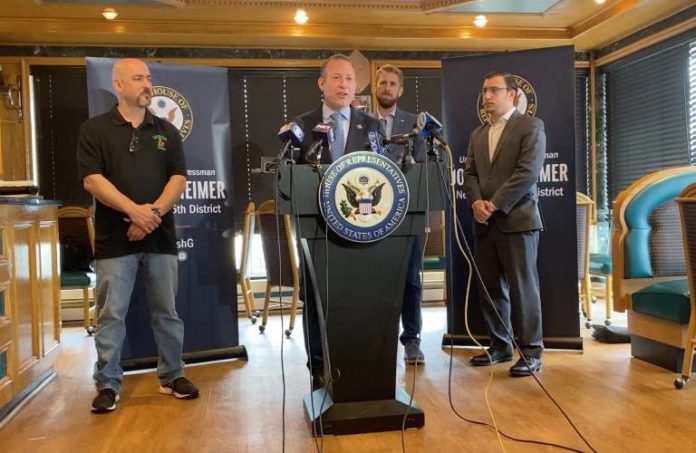 U.S. Rep. Josh Gottheimer made the announcement at the Empress Diner in Fair Lawn — one of the many businesses in the 5th Congressional District he represents that is struggling to return to normal because it is struggling to find employees.

Before the pandemic, the second-generation, family-owned diner had 20 employees and was open 24/7. Now, it’s just open 9 a.m. to 9 p.m. With only a dozen or so employees, owner John Melissas and his father, Nick Melissas, say they don’t have the staff to stay open any longer.

It’s a refrain felt up and down the state.

Gottheimer, a Democrat, wants to help. He’s pushing for the state to implement a $500 back-to-work bonus — good for anyone who starts by Aug. 1 and is still employed by Sept. 1.

The best part, Gottheimer said, is the money already is appropriated for the bonus. Gottheimer said the more than $6 billion the state received in federal aid can be used for such a program — which Connecticut and Colorado already have plans to implement.

“The good news is that we can create this back-to-work bonus program through the Coronavirus State and Local Fiscal Recovery Funds, which we passed in Congress as part of the American Rescue Plan. As we transition from pandemic life to normal life, like so many businesses, they aren’t able to find the staff, just yet, that they need to be fully operational.”

The U.S. Treasury has said that back-to-work incentives are eligible expenses for state COVID-19 relief funds. Instituting a new program would take time — and interest from state officials.

And it doesn’t appear Gov. Phil Murphy is interested.

Speaking at his COVID-19 briefing Monday, the governor said he discussed the idea with Gottheimer and offered praise for the concept — but not necessarily support for the idea.

“I told Josh that I’m open-minded to considering anything we can do to allow the labor force to catch up to what is clearly a recovery right now,” he said.

But Murphy also didn’t appear to be interested in spending the federal money from the American Rescue Plan anytime soon.

For Gottheimer, there’s no better place than incentivizing the unemployed while helping small businesses.

He made the pitch directly to Robert Asaro-Angelo, the commissioner of the Department of Labor & Workforce Development. Gottheimer noted the plan would in some ways pay for itself, as it would take people off the unemployment rolls.

“Although I recognize that instituting such a program would obviously take time, this one-time incentive would offer support to New Jersey residents as they reenter the workforce, setting them up for success in our post-COVID world,” he wrote.

A need clearly still remains. After losing hundreds of thousands of jobs during the peak of the pandemic — with a peak unemployment rate of 16.6% — New Jersey has now recovered nearly 400,000 jobs.

Camden County won’t elaborate on report stadium could be razed