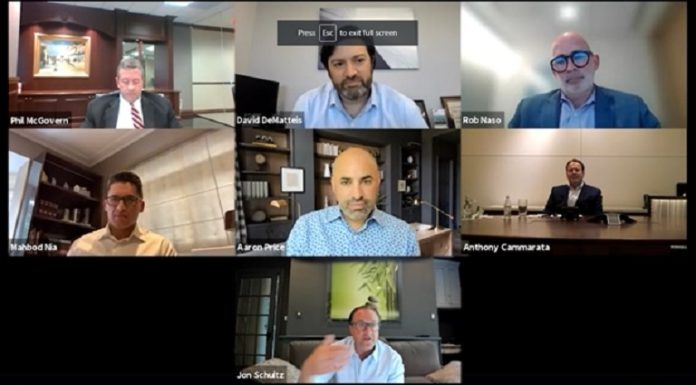 “I think we’re in the beginning stages of a very cool experiment that we’re going to see play out,” he said.

Schultz was speaking during a panel discussion Tuesday morning at the Jersey City Summit for Real Estate Investment — an annual event that brings together the biggest names in the industry.

This year, during the first panel of a virtual event, Schultz and a top group of experts discussed the asset class that has been the most heavily impacted by the COVID-19 pandemic — and the one whose future is still uncertain.

It’s part of a reimagining of the future of work.

All the panelists agreed that companies are coming back — and at a pace that is starting to pick up. How will it work? Well, like Schultz said, it’s all a big experiment right now.

Mahbod Nia, the new CEO of Mack-Cali Realty Corp. — which, of course, calls Jersey City its corporate headquarters and perhaps its biggest source of office — called it a balancing act.

“I think that every company is going to have to find themselves,” he said. “On one side of that equation, you’ve got efficiency, and there are undoubtedly certain efficiencies with doing things virtually as opposed to physically.

“On the other side of the equation is the cost — the development of a culture, camaraderie, mentorship, collaboration, sense of belonging. And if you skew too much to one side, you compromise the other.”

Finding that balance will take time.

David DeMatteis, an executive director at Cushman & Wakefield, said employers should not expect employees who have been away from the office for more than a year to just pick back up where they left off.

“Were actually coaching our clients, both around here and globally, to really just let the folks come back,” he said. “Even schedule a day where they’re not coming in for work, where they’re just coming in to just sit in the office and figure out, ‘Where is the coffee machine now?’ — get acclimated to being back here again.”

DeMatteis said the next step is to wait — and then listen — before responding.

“I think, as people are back, it becomes more and more comfortable,” he said. “When I first came back to the office building, I was walking around with a sanitizer bottle in my pocket and spraying every surface. Then, slowly, you get back into it, and you realize that things are normalizing again.

“So, we’re telling our clients get back and see how people change before you make an investment in rearranging your furniture or hiring an architect to redesign your office. See how people interact in the space for the first four to six months, and then start making decisions.”

While Onyx was a leader in addressing health, safety and wellness issues in its buildings, it has held off making drastic structural adjustments.

“We need to get feedback to see what people need,” he said. “Otherwise, we’ll make a lot of moves that may not even be worthwhile or could actually make it worse.”

“I’ll tell you, I probably know my tenants better than I ever would, because you really had to focus on what was going on in your portfolio and had to reach out,” he said. “Everyone’s trying to help each other, figure out how to move forward, and we’re all in it together.

Schultz, Nia and DeMatteis were joined on the panel by Anthony Cammarata of Goldman Sachs, Rob Naso of BentallGreenOak and Aaron Price of TechUnited: New Jersey. The panel was moderated by Philip McGovern of Connell Foley.