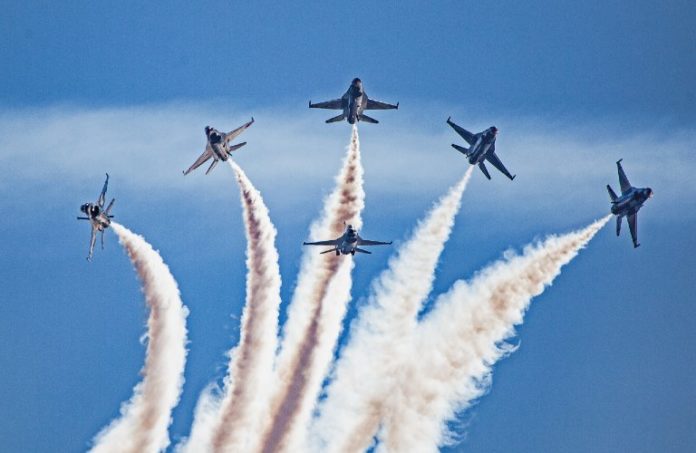 In what can only be viewed as another sign that New Jersey is getting back to normal, the Greater Atlantic City Chamber announced the return of the Atlantic City Airshow on Aug. 18.

The 18th annual event, titled “A Salute to Those Who Serve,” will feature the U.S. Air Force Thunderbirds as the headline act.

“We are thrilled to host the 2021 Atlantic City Airshow, and we are so grateful for our partners and supporters who have returned to help make all the moving parts of this event come together and run smoothly,” Greater Atlantic City Chamber President Michael Chait said.

Chait and others are hoping the return of the show will spark a greater return of visitors to the area. He thanked the area sponsors for helping to ensure its return.

“The marketing firepower and reach of Meet AC and the graciousness of Borgata to once again provide rooms for the performers enable us to once again put on a first-rate show,” he said.

“Welcoming back this extraordinary event to all the communities and patriotic spectators stretching across the tri-state region is a symbolic milestone for everyone, after having to cancel last year,” she said.

“Borgata has been a proud sponsor of the Atlantic City Airshow for the past 18 years, and we are honored to take part in the festivities once again and serve as the host resort, celebrating and entertaining all the aerial demonstration teams and attending members of the military.”

The show will feature a number of top performances, including:

The 2021 event is partnering with the New Jersey Hospital Association to welcome and salute the incredible work performed by health care workers from across the state in caring for their patients, residents and communities during the COVID-19 pandemic. A select number of health care professionals will be invited to show center to enjoy the festivities and to be recognized for their incredible work during the pandemic.

How to view the show

There will not be access to the Flightline Club in 2021. However, unique partnership opportunities and private chalets are available while supplies last by contacting Michael Chait, president of the Greater Atlantic City Chamber, at mchait@acchamber.com. All other Atlantic City beach locations are free and open to the public.

“New Jersey’s health care heroes demonstrate courage and compassion each and every day, but especially so in this pandemic year. I can’t think of a more fitting group of individuals to represent this year’s theme of service,” NJHA CEO Cathy Bennett said. “NJHA is thrilled to partner with the airshow and the chamber for this special tribute.”

Meet AC CEO Larry Sieg said he hopes the event is a big boon for business.

“Meet AC is proud to be a sponsor of the 2021 Atlantic City Airshow and the experiences surrounding the event,” he said. “The airshow has always been a great midweek event, attracting visitors and increased activity for our local businesses.”

Looking to help? Various United Ways collecting for those hurt by...

Fitness resort to open in Bridgewater, bringing 425 jobs to region;...