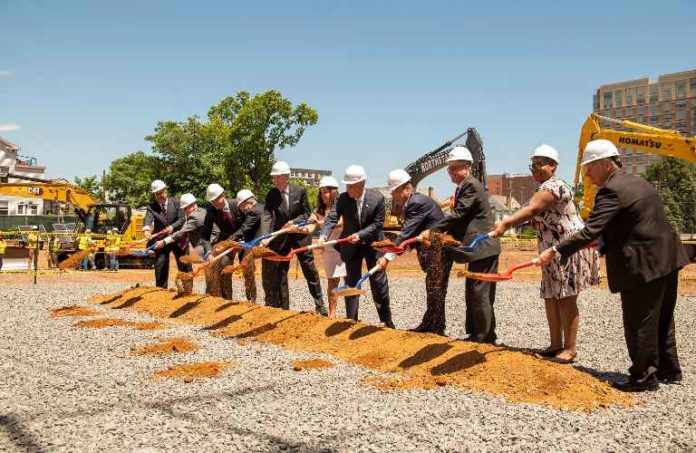 When the Jack & Sheryl Morris Cancer Center, a 12-story, 510,000-square-foot facility that represents a major expansion of the Rutgers Cancer Institute of New Jersey, had its ceremonial groundbreaking Thursday, it marked another step in the institute’s place as one of the top cancer facilities in the country.

For longtime New Brunswick Mayor Jim Cahill, the event marked another major milestone moment in the city’s transformation into one of the leading health care locations in the country.

It didn’t happen by accident.

Cahill told the crowd of a few hundred dignitaries — including Gov. Phil Murphy — how the rise of the cancer center paralleled a goal he and city leaders established three decades ago.

“In the early 1990s, our nation experienced a recession,” he said. “A sluggish economy marked the period from 1991 to 1995. And the resulting adverse impact on real estate development threatened the momentum of our city’s revitalization efforts.

“In an effort to help drive our economy, we embarked then on a new initiative called ‘Health Care City.’ Already home to two terrific hospitals, we actively sought and promoted health care development.”

Cahill said the growth of the Institute helped other facilities grow and prosper, including the Child Health Institute, clinical academic buildings and tremendous growth of the city’s two medical centers, including the women and children’s pavilion and the care center for ambulatory services at St. Peter’s University Hospital, and the Bristol-Myers Squibb Children’s and Children’s Specialized hospitals at Robert Wood Johnson University Hospital.

“To be distinguished as a center of medicine, you need the winning combination of the best in patient care, research, human talent and academic excellence,” Cahill said.

Cahill isn’t the only one who recognizes this.

“Not only does this project directly align with Middlesex County’s history of fostering and investing in innovation and collaboration, but we recognized from the onset immense benefits and opportunities this facility will bring to our community, creating a pathway for residents to receive advanced cancer treatment, new job opportunities and career paths in multiple disciplines,” he said.

Of course, the key is helping in the fight against cancer.

In New Jersey, there are more than 53,000 new cases of cancer diagnosed and 16,000 cancer deaths each year. The cancer pavilion will take the fight against cancer to the next level and will accommodate an additional 20,000 patient visits a year.

Jack Morris, whose philanthropic donation helped spur the $750 million project, said he wouldn’t have it any other way.

Or in any other place.

Morris said he hopes the center will help others see what he sees: That New Brunswick is a home for cancer care and research.

“We’re going to attract doctors and others who want to come here and be part of this. It’s going to be a game changer.”

The Jack & Sheryl Morris Cancer Center, which is being developed in partnership with the New Brunswick Development Corp., is expected to be completed in 2024.

Proud of its success: Leader of RWJUH in Somerset describes accomplishments...

AtlantiCare responds to opioid crisis by ramping up in-house talent