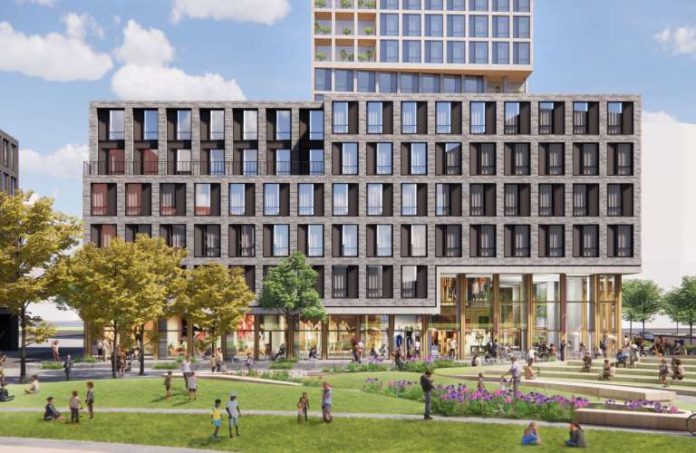 John Schreiber, the CEO of the New Jersey Performing Arts Center, said the overarching mission of the center has remained the same since it opened in 1997: Contribute to the ongoing revitalization of Newark’s downtown.

The neighborhood will bring nearly 350 units of housing as well as retail establishments, restaurants and cultural spaces — and it will come with a pedestrian-friendly extension of Mulberry Street, across what is now NJPAC’s Lot A parking area.

The project, which is expected to break ground in 2022, has an anticipated completion in 2024.

Highlights of the new neighborhood include:

NJPAC is not financing any of the vertical development; rather, it is providing a 6.1-acre ground lease for the project. The project relies on an expected incentive award from the New Jersey Economic Development Authority. Center Street Owners also will seek financial support provided for in the recently enacted New Jersey Economic Recovery Act of 2020, and in a city of Newark revenue allocation bond.

Prudential Impact & Responsible Investments is a partner in the project, as well.

Schreiber said the neighborhood will be a milestone moment for the Arts Center and city.

“What we are saying out loud now is that this next phase of the Arts Center is ready to roll,” he told ROI-NJ. “It is our desire — and it’s a desire that is shared by many stakeholders in Newark — to create a holistic arts-and-education district in the downtown.

“The goal is to create an environment that is really appealing to our Newark residents, but also will give folks from outside of Newark a reason to come down and recreate in a way that is much more than coming to the Arts Center to see a concert, maybe have dinner, and go home.

“The goal is: Let’s create a place that feels great for residents, but is also intriguing, engaging — a unique neighborhood that is a fun place to go and hang around in. That’s the big idea.”

While such an arts district has been envisioned since NJPAC opened, plans for this project are just a few years in the making.

Schreiber said the plan ultimately coalesced into a single vision for the campus: an open, welcoming “public realm” where the arts are activated and experienced both indoors and out. As in Newark’s past, multiple streets and alleys will crisscross the downtown area, connecting busy thoroughfares and letting in light and air, he said.

The team created to conceive, design, develop and build this new neighborhood includes the new entity, Center Street Owners, which is led by L+M Development Partners (which has redeveloped several award-winning Newark sites, including Walker House and Hahne & Co.) and internationally renowned architectural firm Skidmore, Owings & Merrill (which is known for its work in creating technically and environmentally advanced buildings and public urban spaces around the world).

NJPAC, led by Schreiber and Tim Lizura, the arts center’s senior vice president of real estate and capital projects, will oversee it all.

Their vision, they said, is clear.

“Rather than look at this acreage as a collection of one-offs, we want a holistic and thoughtful master plan,” Schreiber said. “The beauty of NJPAC serving as master planner is that we are not obliged to squeeze every dollar out of every inch of real estate.

“We can make thoughtful decisions about not only how to create enticing residential, but also have education and cultural assets as part and parcel of it — totally integrated to it.”

That integration, Lizura said, is key to its success.

“The trick to create vibrancy is to have people there 24/7,” he said. “We have a terrifically vital business community that gives it great vitality during the day. Residents populate streets at nights and weekends. You put those two things together, you immediately get vibrancy.”

“The redevelopment of NJPAC’s campus will be a game-changing step forward for the evolution of Newark’s downtown, creating an ideal live-work-play environment in the city’s heart — and making more affordable housing available for families of all kinds,” Newark Mayor Ras Baraka said.

“NJPAC has been a leader in the revitalization and redevelopment of downtown Newark,” he said. “I am thrilled to see this next phase of development around one of New Jersey’s cultural linchpins, which will continue the tremendous progress being made in Newark while embracing its storied past.”