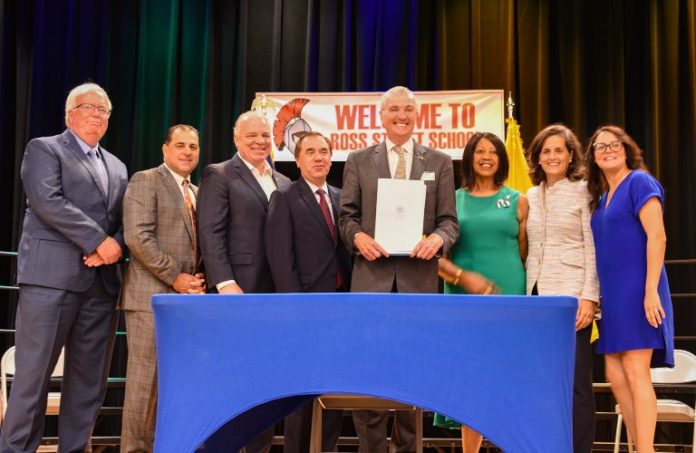 The $46.38 billion spending proposal includes a $2.356 billion surplus, which is 5.1% of budgeted appropriations, well above the average of the previous administration.

Here is some of what is included — as it pertains to the pension, debt and economic development, according to the Governor’s Office:

The budget allocates over $4.2 billion to improve the state’s long-term fiscal health and substantially reduce outstanding debt by setting aside $3.7 billion for the Debt Defeasance and Prevention Fund established through companion legislation. $2.5 billion of this fund will go towards retiring state debt, which is expected to generate savings of over half a billion dollars. The other $1.2 billion will support capital construction that replaces current or future debt issuances.

The budget includes a record total payment of $6.9 billion to the State Pension Fund, which includes the full $6.2 billion pension contribution for fiscal year 2022 and an additional $505 million pre-payment toward subsequent years.

The governor and Legislature have agreed to dedicate additional dollars toward critical programs. At this point, the state has or will have dedicated over $1 billion of state and federal dollars toward small business relief and economic growth programs.

“This year’s budget represents the culmination of a four-year journey to fix many longstanding problems in New Jersey,” Murphy said. “This is a budget that invests in our middle-class and working families — supporting both those building their families and careers and those who are living out their richly-deserved retirements. It also puts a world-class education within reach for all while tackling our age-old property tax problem — ensuring a stronger, fairer and healthier future for the generation born and reared in the shadow of an unprecedented pandemic.”

Coughlin summed it up this way.

“Thanks to $5 billion in unanticipated revenues, this budget builds beyond the priorities we initially set out to achieve,” he said. “Our spending supports the best public school education system in the country, puts forth nine meaningful new and expanded tax relief programs for working families, seniors and college students, and fulfills our full pension obligation for the first time in 25 years.

“With a record $6.9 billion toward pensions, over $100 million in new college savings, boosts to school aid by over $650 million, $10 million for anti-hunger efforts, and up to $500 rebates for 760,000 hardworking families, these are not just line items. These are life-changing contributions that put money back in people’s pockets, keep property taxes in check and protect those left vulnerable by the pandemic.”