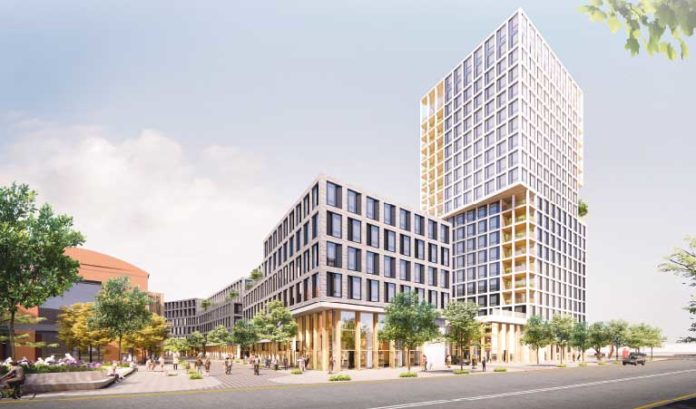 New buildings (two low-rises, one high-rise), new retail and restaurants (including a food hall), a new cultural center and a new pedestrian-friendly road. They are all part of one big idea.

When the New Jersey Performing Arts Center announced details of the $150 million neighborhood project it is creating, it checked off a lot of items that could make the center’s 7.3-acre riverfront campus the work-live-play arts district that has been envisioned since the building opened in 1997.

“What we are saying out loud now is that this next phase of the Arts Center is ready to roll,” NJPAC CEO John Schreiber told ROI-NJ. “It is our desire — and it’s a desire that is shared by many stakeholders in Newark — to create a holistic arts-and-education district in the downtown.

The project, which is expected to break ground in 2022, has an anticipated completion in 2024.

Highlights of the new neighborhood include:

NJPAC is not financing any of the vertical development; rather, it is providing a 6.1-acre ground lease for the project. The project relies on an expected incentive award from the New Jersey Economic Development Authority. Center Street Owners also will seek financial support provided for in the recently enacted New Jersey Economic Recovery Act of 2020, and in a city of Newark revenue allocation bond.

Prudential Impact & Responsible Investments is a partner in the project, as well.

Schreiber said the new neighborhood is a milestone moment for the Arts Center and the city. 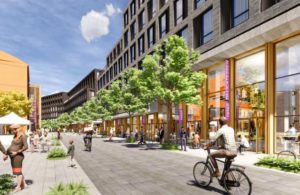 “The goal is: Let’s create a place that feels great for residents, but is also intriguing, engaging — a unique neighborhood that is a fun place to go and hang around in,” he said. “That’s the big idea.”

ROI-NJ talked with Schreiber and Tim Lizura, the Arts Center’s senior vice president of real estate & capital projects, to get a better feel for how the project came about — and what it will be about.

ROI-NJ: This type of development is what was envisioned for the area when NJPAC opened in 1997. But, more specifically to this proposal, when did the idea really get going?

John Schreiber: We’ve been working on this for years, but we were actually able to formally buy the land from the state at the end of 2018. That’s important, because it gave us control over this acreage, which is hugely important.

ROI: Why is that?

JS: The beauty of NJPAC serving as master planner is that we are not obliged to squeeze every dollar out of every inch of real estate. We can make thoughtful decisions about not only how to create enticing residential, but also have education and cultural assets as part and parcel of it — totally integrated to it.

ROI: A neighborhood, first and foremost, is about residents. This project will have approximately 15 for-sale townhomes and condos and approximately 330 residential rental units (80% market rate, 20% affordable housing). Can the area and the city fill those numbers?

JS: We feel it already has. In the past few years, folks have started to live downtown in record numbers — and that’s because of the Hahne’s building, Walker Tower, 50 Rector Park, One Theater Square. All of that rental is rented up to 95-100% capacity. That gives us confidence that the 350 units that we will be building are going to appeal to people.

ROI: Where do you think the buyers and renters will come from?

We’re not Harrison. We’re not a bedroom community where you sleep and then you wake up and take the PATH into Manhattan.

ROI: Talk about how the elements of the project work with the existing neighborhood around the Arts Center.

ROI: That sounds good, but how do you bring it all together — the arts, the housing, the retail?

TL: The trick to create vibrancy is to have people there 24/7. We have a terrifically vital business community that gives it great vitality during the day. Residents populate streets at nights and weekends. You put those two things together, you immediately get vibrancy.

That vibrancy helps makes make the retail more compelling — and brings a different stable of retailers to the to the equation. We’re so excited about the food concept that Marcus is championing, but we’re also excited about PJ’s Coffee Roasters, which just opened in One Theater Square. There’s Tai Chi Bubble, a ramen noodle place that’s getting ready to open. And Swahili Village, which is a Northern African cuisine restaurant, is under construction. So, we’re populating some of the street level retail with a variety of choices.

And then, there’s the Cooperman Family Arts Center, which will be so integral to the success of the district. When you think about three years from now, the corners of the extended Mulberry Street and Center Street will be one of the greatest corners in the city, with the Cooperman Center on one corner, Mulberry Market food hall on another and Chambers Plaza on another.

ROI: There’s a lot to take in here. When you see the project in its totality, is there anything that you feel some people will overlook?

TL: One thing that may not be immediately obvious are the opportunities that are embedded in the extension of Mulberry Street, which is coming through our site. We now have a new front door. We’ve engaged with L+M to think about how we reimagine what we are calling the East Wing.

As a new face of the center, it’s really one of the very first times that the center proper has the opportunity to do an expansion and renovation that will impact the way we operate and impact the way the community sees our building — and we’re working hard to make sure that opportunity is as iconic as the balance of the building. It’s a little piece to the overall project, but it’s a huge milestone in the center’s existence.

ROI: Let’s talk milestones. This certainly is one — a palpable arts and education district. We have to ask, is there concern that the district will be too artsy, if that’s possible? Do you have to be a lover of the arts to live here?

JS: I love artsy people as much as the next guy — I am one. Artsy people are absolutely important to this project, and we’re going to integrate Newark artists and creative artists in a holistic way throughout the development. That being said, this needs to be a place where everybody feels welcome. We want to give everybody a chance to sample arts and culture in the way that makes sense for them.

I’ll give you an example. I used to produce jazz festivals. Not everybody loves jazz, but everybody loves jazz festivals, because it is a way to step in and get introduced to an art form and you take from it what you like. It’s a way for art to get integrated into your life in whatever fashion you want. We’re building a neighborhood where the arts are at the heart of it. What’s better than that?

ROI: The goal always has been to have the Arts Center help develop the rest of the downtown. Is there a concern that the project is so all-encompassing that it will become its own individual area, as opposed to be a unique part of a greater Newark community?

JS: This is not a silo — and it’s not meant to be a silo. We are in regular communications with all of our partners: The city, Rutgers-Newark, Audible, the Newark Museum — everyone in our neighborhood area. The goal is, how can we make one and one equal three in terms of what we intend to do. In 15 years, when this has fully evolved, how can we make it feel holistic, comprehensive — and, most importantly, have it not feel like you need to be within this geography in order to have a terrific experience.

ROI: We love looking ahead. We’ll give you a shot at it. Give us your vision of the future.

JS: I want folks to show up in Newark at 3 o’clock in the afternoon for an 8 o’clock concert. I want them to go to the museum. I want them to see the statue in Tubman Park. I want them to grab a sandwich in Military Park or hang out and have an early dinner on the Arts Center campus. And I want them to think, ‘What would it be like to live here?’

The possibilities are really limitless, as long as we continue to operate in a collaborative fashion for the greater good. And that’s what is great about Newark. That is how people think around here. There’s a collaborative community, intention and spirit. And we are so proud to be able to advance that.