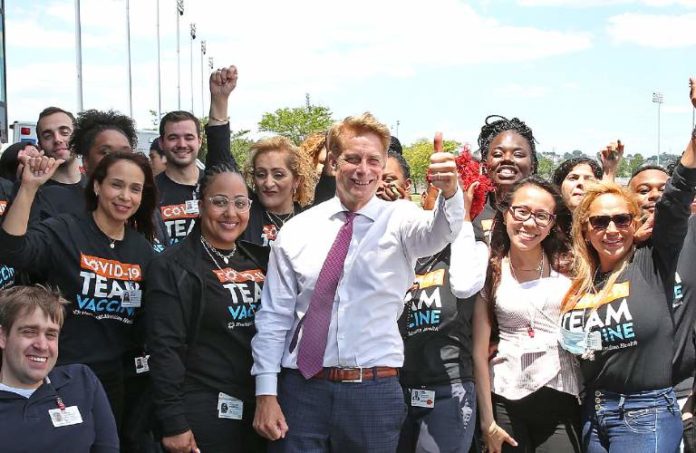 Hackensack University Health Network officially merged with Meridian Health five years ago Thursday with a promise that the new entity — Hackensack Meridian Health — could change the landscape of health care in the state.

CEO Bob Garrett said he feels HMH has done that and more.

The merger helped create one of the state’s two mega health systems — one that has handled more than 2.5 million emergency department visits and admitted more than 700,000 patients at its 17 hospitals and more than 500 patient locations throughout the state.

Garrett said he is proud of those numbers, but feels the system’s true influence is found in three other achievements. In the five years since it was created, HMH has:

“We are delivering on our promise to transform health care delivery through innovation, technology and education,” Garrett said. “Thanks to our world-class team members, we have made extraordinary progress in making health care more affordable, accessible and convenient for the communities we serve.”

Garrett said the three areas of growth prove his point. All, he said, show how HMH is changing the landscape of health care, not just providing services.

For Garrett, that starts at the Hackensack Meridian School of Medicine, which prides itself in having students as diverse as the populations they will serve — as well as having a three-year path to residency in an effort to keep costs (and loans) lower.

The interdiscliplinary education the school stresses ensures future physicians train with other future providers so they are adept at working in teams, Garrett said. Research shows this improves outcomes. And the community immersion program — where students are paired with people in underserved communities to cover aspects of care not traditionally addressed in medicine — is a model for all, Garrett said.

“This medical school has exceeded all of my wildest dreams and expectations,” he said last month. “I think back to the vision that we had and how it always linked back to our mission: to transform health care.

“I believe you can’t transform health care unless you start at the beginning. You have to transform medical education — training, educating a new generation of physicians to really meet the needs of the health care system and of society in the future. And I think we’ve done that.”

Garrett said the same accolades apply to CDI, which opened in 2019 — and showed its impact during the pandemic.

CDI developed one of the first commercial diagnostic COVID-19 tests, reducing wait time from days to hours for a diagnosis. It also developed a rapid test for variants and a convalescent plasma therapy trial.

Dr. David Perlin, the chief scientific officer at CDI, said at the time that the creation of the rapid COVID-19 test is what the center was designed to do.

“This is why the CDI was created,” he said. “It was created to take people who are doing really innovative science and translate it very rapidly for clinical application. This is what we do.

“This is a complete validation of the concept that HMH CEO Bob Garrett had in mind when he said, ‘Let’s make science work for our patients.’ That’s why I came here and that’s what I want to do.”

Garrett feels the merger with Carrier Clinic is another way HMH is looking forward.

In February, HMH opened the first part of a new state-of-the art addiction treatment center in Bergen County. At the time, Garrett said such a facility is what he was envisioning when HMH merged with Carrier Clinic in 2018.

“This has been a vision of ours for a number of years,” he said. “When we looked at the data, we were seeing a lot of New Jersey residents having to have their addiction treatment in other states because there weren’t first-class facilities here in New Jersey. We wanted to change that.

“And, when we merged the Carrier Clinic and Hackensack Meridian, we were able to take the vision and turn it into a plan.”

Trying to put all this in perspective is hard, Garrett said.

The system, however, attempted to quantify it. Garrett said HMH has been responsible for a $2 billion community contribution.

It’s a number, Garrett said, HMH is looking to increase.

“We are proud of what we have accomplished to date, but we recognize there is much more work to be done,” he said. “Together, we will continue to deliver the most innovative and compassionate care for our communities, now and for decades to come.”