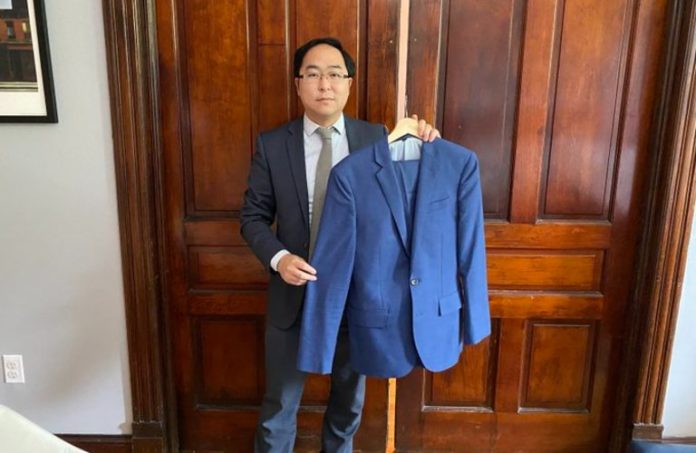 U.S. Rep. Andy Kim admits it: He thought about throwing away the blue suit he bought for the inauguration — the one he was wearing when he gained notoriety for helping to clean up the Capitol following the storming on Jan. 6 … the one he wore one week later, on Jan. 13, to cast a vote for impeachment.

History will be happy he didn’t.

On Tuesday, Kim (D-3rd Dist.) announced he has donated the suit to the Smithsonian Institution, which will feature it in an upcoming exhibit.

Kim, in a Twitter thread announcing the news, told how he thought of throwing out the suit.

“When I got home, I vowed to never wear the suit again. I even considered throwing it away,” he tweeted. “It only brought back terrible memories. I could never separate that suit from the events of Jan. 6. I hid it in my closet, as I never wanted to see it again.”

Kim said he didn’t think his actions on Jan. 6 were necessarily historical.

“Like my suit, what I did on Jan. 6 on its face was unremarkable,” he said. “I saw a mess and cleaned it. I wanted to right the wrongs of that day as quickly and as tangibly as I could. Neither my suit nor my actions are on their own worthy of memory, but the story didn’t end there.”

The public response, he said, made him view the moment — and the suit — differently.

“In the following days, I started to receive thousands of cards from across the country. Many from kids,” he tweeted. “Strangers who wanted to tell me how they felt when they saw the photo of me. They talked about the blue suit. The suit meant something different to them than it did to me.

“People wrote saying the blue suit gave them a sense of resilience and hope. For me, I was in a tough place. In days after Jan. 6 I had an unshakable regret that I didn’t do more to keep people safe. But feeling of hope/resilience in the cards helped me feel stronger. Thank you.”

Kim said the call from the Smithsonian made him realize the gravity of the moment.

“The Smithsonian called later in January,” he tweeted. “Honestly, I wasn’t thinking about how the day would be remembered, as I was still living it. In fact, after the call, I had to pull over on the side of I-95 as I started to tear up uncontrollably while driving home. I was still not OK.

“When the Smithsonian requested the suit, I tried to imagine what an exhibit about Jan. 6 would look like. Perhaps it would have broken glass from shattered doors, torn flags and signs. Video of the mob trying to hijack our democracy. But there was so much more to that day.”

Kim is hopeful the Smithsonian will tell it.

“The story of that day wasn’t just destruction,” he tweeted. “There was hope and resilience. The Capitol Police were heroes that saved lives. Colleagues and staff showed bravery. I hope those stories are told. They help tell a story of light on one of the darkest days in our democracy.

“I told the Smithsonian, ‘Yes,’ to donating the blue suit because the telling of the story of Jan. 6 isn’t optional, it is necessary. There are many stories of Jan. 6. Mine is just one. We cannot heal as a nation unless we have truth. Let truth be truth.”

6 months ago today I wore this blue suit as I cleaned the Capitol after the insurrection, now I just donated it to the Smithsonian. Jan6 must never be forgotten. While some try to erase history, I will fight to tell the story so it never happens again. Here is one story…(THREAD) pic.twitter.com/GKePd1ZMrr

Murphy defends closing of parks, said there were reports of ‘enormous’...