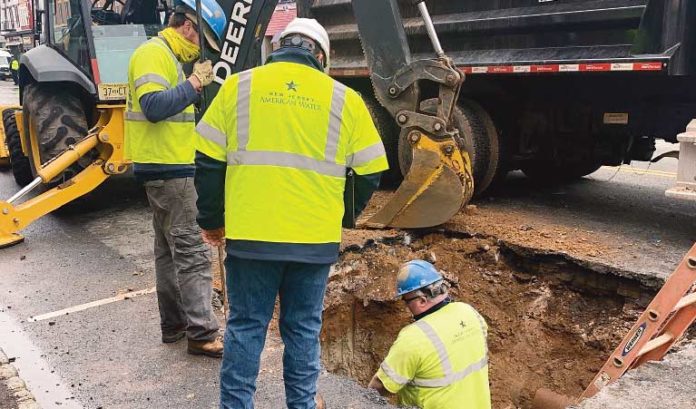 Mark McDonough, the new president of New Jersey American Water, is thrilled the Camden-based utility serves approximately one in three residents in the state — a percentage of penetration that is higher than the norm.

He wants it to be higher — and feels the state will be better off if it is.

McDonough, who was elevated to the top spot in April, said he’s eager to meet with mayors across the state about working with New Jersey American Water. He feels he has an easy case to make, saying:

“First and foremost, water is the life-sustaining utility,” McDonough said. “You can go without air conditioning and electric for a while, but you really can’t go without running water or being able to flush the toilet. People notice that very acutely.”

Therein lies one of the biggest issues with water. If the taps are going and the toilets are flushing, people tend to take it for granted. They don’t see water systems as a driver of economic activity. That’s the message McDonough wants to send.

“We’ve been very proactive in that regard — and we’re looking to be even more proactive,” he said. “It’s a conversation we have every day and one I intend to have more and more with the mayors of New Jersey.

“When you look at a city in terms of us acquiring a system, it’s not just taking over the nuts and bolts of the system and what the cost of updating the infrastructure may be. I think leaders need to see us as providing the sufficient infrastructure and skeleton to build up upon. It’s absolutely key to their ability to generate property tax revenue and all the things that feed municipalities.”

Even more, as New Jersey American Water increases its penetration of service, costs actually go down, while quality goes up, McDonough said.

“Getting bigger and stronger throughout the state gives us that much more ability to pitch in and help when there are challenges and problems in different communities,” he said. “The thing about water, the more systems you can connect together, the stronger and more resilient those systems become. You get redundancy from multiple sources. That’s how New Jersey benefits.”

McDonough, a lawyer by training, has been with American Water, the parent company of New Jersey American Water, since 2005. He served in a variety of roles — most recently as the president of American Water’s Military Services Group, where he led a team of nearly 500 employees that provides water and wastewater services to 17 military installations across the country. He brings experiences in both the operational and regulatory side of the business.

McDonough recently spoke with ROI-NJ about all things water. Here’s a look at the conversation, edited for space and clarity.

ROI-NJ: Let’s stay on the topic of conversations with municipal leaders. How is that going to work?

Mark McDonough: We need to make sure that we’re telling our story. We need to explain the complex nature of climate variation, the impact of aging infrastructure with no real capital source to improve it. What’s happening in Washington, in terms of the infrastructure bill, is great. But that won’t recapitalize an entire system. It may get you an upgrade on your plant, it may upgrade a small amount of your system, but you need that steady, professional utility operating it.

And then, there’s the emerging contaminants. There’s a long list of things that we track and look at, we work with EPA very closely.

MM: It is. And the mayors shouldn’t be asked to be all things to all people. When I would meet with the military, they said their bumper sticker was, ‘Figure out what you don’t do well, and stop doing it.’ It’s a great adage for a mayor to say: ‘I can’t do this as well as a professional utility. So, I should probably step out of that, because it’s only going to get more complicated every day.’

The sooner that happens, the better position that town will be (in) to have a great infrastructure upon which to grow, whether it be housing or industry or commercial — whatever it is they want to be.

ROI: Utility infrastructure is not just a local issue — it has statewide impact, too. Especially when it comes to companies deciding whether they want to relocate to New Jersey and, if so, where they should go. What role can New Jersey American Water play here?

MM: We’re already working with Choose New Jersey on this. We’re planning on having strategy meetings with them to explain where we feel our infrastructure is strongest to take on new folks, in terms of new industry that might be coming to the state. I know that the electric and gas utilities already have had those conversations, saying, ‘This is where we have a lot of resiliency in the grid.’ We can do the same sort of thing, too, looking at our footprint, because we’re statewide now.

ROI: Let’s talk about that statewide saturation. It feels like every week the company is spending millions to replace lines somewhere in the state. Can you sum up the infrastructure work you are doing now?

MM: It seems like we’re replacing every foot of the pipes, but, with thousands of miles of pipes, we’re really only doing chunks at a time.

ROI: How do you pick and choose where you go?

MM: There’s a lot of different ways. We use a lot of cameras, we use water quality, we can use flow rates. There are a lot of things that can be used by the engineers and the operators to determine what’s going on. It ultimately becomes a mixture of that steady recapitalization of assets that are 75 to 100 years old — and past their useful life — and those places where we are dealing with those emerging contaminants. That’s a big issue. The good news is that they can be removed.

ROI: How do you do that?

MM: There’s a couple different types of filtration processes — and we’re getting very good and very cutting-edge at doing it. This is one of the great things about having big American Water behind us at New Jersey American. We have the capital and the opportunity to put the infrastructure in and big AW can direct us on how best to do that, whether we use a granulated activated carbon process, which is a very sort of like a super-sophisticated Brita filter.

ROI: In addition to all the concerns about aging infrastructure and contaminants, there are issues of security and terrorism. How much of a concern is that?

MM: We’re extremely concerned about it, but we feel like we’re in a really good position. The Defense Department has severe requirements on cybersecurity, which is really good because it helps inform our IT department on the regulated side.

We’re very confident in our technology and innovations group. And we work closely with DHS to make sure that we’re on, you’re not just the cutting-edge, but the bleeding edge of those technologies for utilities. So, we feel we’re very well positioned to deal with those.

ROI: OK. Last question. And perhaps, the most important question: Water … is there enough? Are we wasting it? Do you feel people in New Jersey and the U.S. truly understand how precious a resource it is? Is there more education that needs to be done on the subject?

MM: I think there’s certainly more that can be done. It’s sort of basic. If we get back to putting the capital where we need it and thinking holistically about the operation of these systems, we can do a tremendous amount to conserve the water that we have. I distinctly remember being in front of an admiral who said, ‘I wish I could save 30% of my water.’ I said, ‘If you can prioritize your system and redo your pipes, you will.’

It’s not brain surgery. Low-flow faucets and things like that are nice, but really recapitalizing your system and running it efficiently and effectively is what we need to do. It’s not that there’s less water in the world than there was a million years ago, it’s just that it’s becoming harder to get at and more often contaminated when you get it.

We just need to be thoughtful about how we take that water, be good stewards with the water when we have it, and then return it back to the environment to be reused again.

Getting the call: How Orange entrepreneur landed his product on Walmart.com