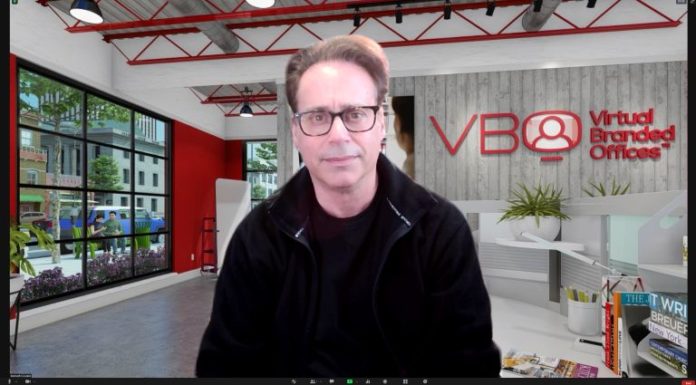 Ever have déjà vu during a Zoom call? It would be hard to avoid chatting with Kenneth Gruskin, after watching the same woman walk behind him for the fourth time in five minutes.

Well, before then … you might also notice that he uses a backdrop for video calls that’s composed completely of computer-generated elements. And he’s hoping you will, too.

Because, as businesses decide to ditch the office for remote work setups, they aren’t leaving behind all architects. There’s at least one local firm, headed by Gruskin, that’s hoping to follow them into that all-virtual environment.

He looks at it this way: In a remote-ready work world, why can’t architects still get involved with designing virtual environments in the way they do physically?

“And, along with everything else, it’s a way for us to stay involved with companies that are shedding their physical footprint,” Gruskin said. “It’s just a good way to stay in touch with clients … that might not be the big Facebook and Amazon companies that are still buying up real estate.”

From the architect perspective, Gruskin does see a trend of companies embracing hybrid work models that have them scaling back on their traditional office expenditures in favor of staff rotating in and out of in-person environments.

From the marketing and branding perspective — because Gruskin’s Springfield firm does that, too — he also sees a trend of the need to maintain professionalism and still communicate a brand identity during virtual meetings.

The intersection of those trends is where the idea of a service that would allow clients to spruce up video calls came from.

“It’s more than a business card — it’s something you’re using to talk to someone sometimes for an hour or more,” Gruskin said. “It’s potentially a great expression of your branding.”

The question is: Does it make a difference whether someone just has their webcam pointed at them and a nondescript wall?

Gruskin argues it does. He pointed to at least one anecdote he was aware of: an attorney who lost an account because, Gruskin said, “It didn’t sit right that someone was working out of their dining room and they were paying these high fees.”

“Then there’s the HR question that’s often overlooked,” he said. “You have people seeing private things in the background, whether it’s personal details or passwords on bulletin boards, kids running around or, as I’m sure everyone sees these days on the news, someone climbing half-naked out of a hot tub behind the person on a Zoom call.”

When it comes to prefabricated videoconferencing backgrounds, there are some static options offered within platforms such as Zoom or Microsoft Teams. And there are also other companies that have “freemium” services, or basic products for free, with the stipulation that customization and additional features come with a price tag.

When it comes to the free option, Gruskin looks at it in architectural terms. You can buy prefabricated plans for a house or structure for cheap, or you can pay for the bespoke architectural plans.

Based on what Gruskin reports as far as feedback from clients, they’ve been pleased with the customization of the “virtual branded office” concept.

“We have one client, a therapist, who wanted to make sure that the background, as people talk about their feelings, was part of helping achieve good outcomes,” he said. “Well, that client’s patients all commented on how they found it calming. And she commented that she felt relaxed herself with it as well.”

Overall, Gruskin said the process of creating virtual environments for clients — adding an ocean into the background of a client near a New Zealand beach, or a server room into a tech firm’s environment — has been an interesting experience for an architecture firm.

“You can design things in a way you can’t in real life, and it’s obviously very different,” he said. “There’s no fire safety ordinance to worry about.”