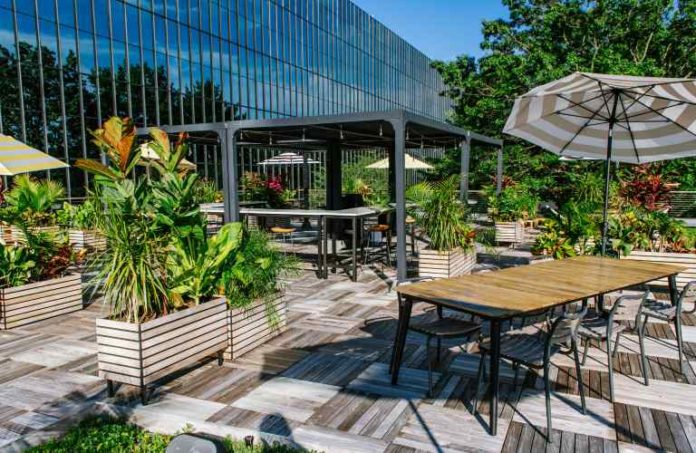 After a year of pin-drop silence in offices, the percussive heartbeat of lively conversation and live music might be the last thing you’d expect to hear echoing through corridors of workplaces.

But that’s exactly what reverberates now from the upper levels of the office and retail “metroburb” monument in Holmdel, Bell Works.

In a total turnaround from the pushing workers out of shared office spaces that went on during the pandemic, workplaces are showing signs of life again with the help of amenities like Bell Works’ new top-floor bar, Bar Bella.

And Paola Zamudio, creative director and lead designer at Bell Works, as well as founder of NPZ Style + Décor, said the small establishment on Bell Works’ roof deck, which opened May 13, is going to be a popular approach for other buildings trying to do the same.

“It’s a trend I expect to see more in the future,” she said, adding that “tenants of office buildings are going to want more amenities, places like this — somewhere that’s attractive for workers to have fun during the day or escape after work.”

Zamudio added that, even as people start to think of the current situation as post-pandemic, it still “makes people feel a little safer” to be outdoors. It’s also a good insurance policy in the event of indoor restrictions in the future.

“Designing these outdoor spaces is more important than ever now,” she said. “But it’s also not totally new — outdoor and rooftop spaces have always been attractive.”

Zamudio, who has been involved with the design of Bell Works since Somerset Development purchased the historic building for a major renovation in 2013, took inspiration from a place where it’s especially common — somewhere she once lived, also — Italy.

Unlikely a destination for a coastal European getaway as a northern New Jersey suburb might be, Zamudio saw the modern metroburb in Holmdel as a perfect fit.

“The idea was to have a bar that’s like you were somewhere in Spain or Italy,” she said. “Everything was carefully curated — from the look of the space to the drink menu and the music we play. … People say they feel transported, and that’s what we wanted to create.”

And, however common the rooftop bar and eatery might be in other settings, it wasn’t until the collective experience of 2020 that this designer was inspired to try it locally.

“When the pandemic hit and things started to close down — even though we never fully closed down — we noticed people wanted to be outside more often,” Zamudio said. “People were sitting outside, working on their laptops. And, once things started to open up more, we wanted to do something special with our outdoor space and create a destination.”

This summer — as workers continue their slow, sometimes reluctant migration back into offices — Bar Bella’s party won’t be too far out of earshot. It will host live musical performances throughout the summer months in partnership with Monmouth County’s Axelrod Performing Arts Center.

“We want to have people back, and it has been really successful so far,” Zamudio said. “We’re getting really good feedback — people saying it’s really what they wanted to see in this area. It’s great.”