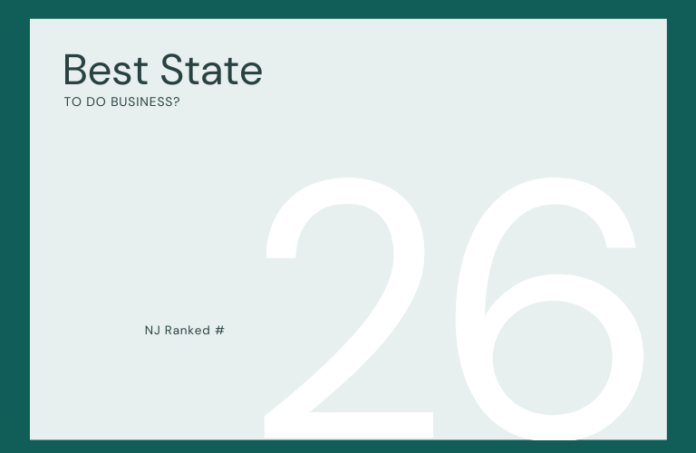 New Jersey prides itself on having the best pizza, the best schools – and being the best place to live. But if the state is going to celebrate its successes in national rankings, it needs to own up to its shortcomings, too.

New Jersey is not the best state for business.

CNBC’s annual study of the best states to do business ranked New Jersey No. 26 – or just out of the top half. The rankings were released Tuesday morning.

CNBC officials say they rank states on 85 different metrics in 10 key categories of competitiveness. This is the 14th version of the list.

Virginia was ranked No. 1 for the fifth time in the survey.

New Jersey struggled on some of the key categories, including cost of doing business and business friendliness. Education was only metric in which New Jersey placed in the Top Ten (but the state wasn’t first).

Virginia, it appears, beat New Jersey at its own game. Virginia performed well in the critical categories of education (No. 2) and workforce (No. 3). And earned the top spot despite ranking No. 26 in cost of doing business.

“This year’s Top States study was always going to be a verdict on which states were best poised to succeed coming out of the pandemic, and Virginia is a clear winner on that score,” CNBC’s Scott Cohn said. “Not only does it have the talent that companies are craving, it has also taken major steps in the area of inclusiveness, which is especially important this year.

“But perhaps the best evidence of Virginia’s competitive strength is the fact that it was our Top State before the pandemic in 2019 and is back on top coming out of it.”

Virginia prides itself on being a Right to Work state, but other states with more progressive agendas also did well, as Minnesota and Colorado both scored well.

Here is the top ten: