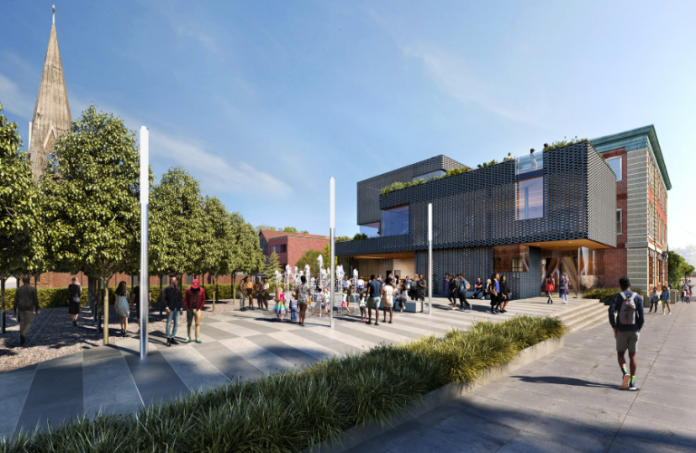 Calling it a place where Newark residents’ movement for justice and celebration of life will be on permanent display, Mayor Ras Baraka, city historian Junius Williams and other dignitaries unveiled the vision for the Newark Community Museum Monday.

Newark officials said the museum will be created at the city’s 1st Precinct, located at 17th Avenue. The precinct is where the 1967 Newark Rebellion began, 54 years ago Monday – though, at that time, the structure was designated the 4th Precinct.

Newark officials said the precinct will be closed by the end of the year and transitioned into the museum and the headquarters for the Office of Violence Prevention and Trauma Recovery.

Residents will be asked to donate their artifacts for display that portray a story of resistance to injustice, and stories of people’s struggle for justice. The museum will chronicle local activism and positive police changes. In addition, the committee has commissioned a series of video documentaries entitled “Our City – Our Stories,” which premiered Monday.

A search is underway for a permanent museum director, officials said.

“Re-imagining the Precinct building where the Newark Rebellion began will remind us of our city’s history of fighting for justice while building a future where violence is seen as a public health issue in which policing is only one part of the solution,” Baraka said. “The museum will enable residents to both record Newark’s history and see it directly.

“The Office of Violence Prevention and Trauma Recovery will continue its effective work of involving the community in solutions that reduce violence and trauma.”

Under the mayor’s direction, Williams has organized a community-based Museum Advisory Committee, which meets periodically to share opinions about the direction of the Newark Community Museum, as well as the video documentary.

Williams said he values the role.

“It is an honor to work with the mayor to make his vision come true,” he said. “I am happy to work with his team, members of the community and construction professionals to see the 1st Precinct turn into a venue where memories and new ideas can help create a climate of non-violence in Newark.”

The city engaged the services of global architecture and design firm Gensler, led by architectural design director Roger Smith, to lead the vision design for the building structure. Gensler’s concepts utilized ideas from the MAC and the general Newark community and was set into motion by students at the NJIT Hillier College of Architecture and Design.

“This museum is designed to showcase Newark’s rich history and provide a multi-generational space for the community to share their stories, learn, and heal,” Gensler Design Director Roger Smith said. “The design was enriched by multiple discussions with the community around how the museum could best reflect their aspirations and inspire hope for the future.”

The Rebellion was fueled by racial disparities in policing and arrests, unequal access to resources and opportunities, and civic disenfranchisement. On the evening of July 12, 1967, John Smith, a black cab driver, was dragged out of his car and brutally beaten by police. His attackers then arrested him on charges of assault. News spread and Newark residents rose up. The uprising and police violence lasted for six days, resulting in 26 deaths and thousands of injuries and arrests – overwhelmingly affecting Black residents.

“There is a negative history in that building,” Baraka said. “We are going to set it on a course of positivity.”