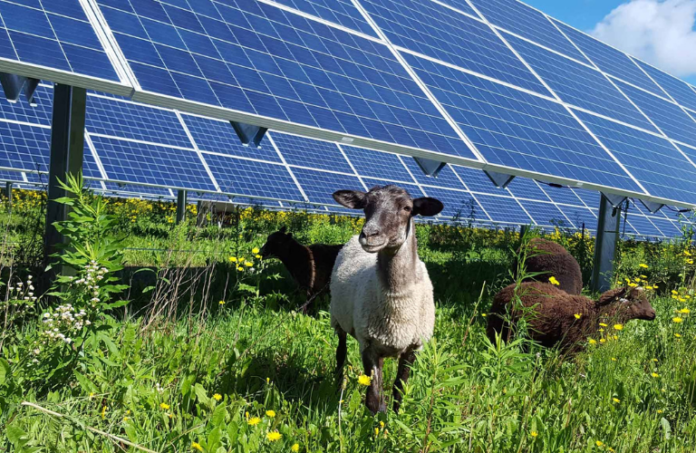 That Massachusetts-based Enel Green Power North America wants to grow its presence in New Jersey isn’t at all surprising.

The company is a leading developer, long-term owner and operator of renewable energy projects in the U.S. and Canada and New Jersey is a place it wants to be, CEO Georgios Papadimitriou said.

That’s why the company was pleased to announce earlier this week that it had acquired a portfolio of six development-stage solar-plus-storage projects in New Jersey from Dakota Renewable Energy – with the planned projects totaling more than 500 MW of new clean energy capacity and more than 100 MW of battery storage.

How the company will do so, may generate more than a passing look: The company’s plans, it said, involve sheep.

One of the properties involved – the Nichomus Run Solar Farm proposed for Pilesgrove in Salem County – will have an integrated sheep farm.

It’s one of the latest trends in the sector. In fact, in locations around the globe, solar generation and agriculture are being combined on the same piece of land – often termed “agrivoltaics” or “dual-use solar.”

In this case, sheep have become common on solar farms as a way to continue the agricultural use of the property and avoid expensive grass mowing. Dakota Power Partners, which will oversee some of the properties, is planning to create the largest sheep-farming operation in New Jersey at Nichomus Run

Enel Green Power is well versed in the concept, having such a setup on a solar project in Minnesota. Sheep, however, are not the main focus of the company.

Enel Green Power’s planned growth in New Jersey is part of a 3.2 GW portfolio of solar and solar-plus-storage projects the company acquired from Dakota Renewable Energy. The 24 development-stage projects, including 450 MW of storage capacity, are located in the Mid-Atlantic, Midwest and Western United States and are planned for commercial operation beginning in 2023.

All of Enel’s projects in development in New Jersey are designed to include paired battery storage to capture additional value streams and add resiliency to the power grid as the nation develops more renewable energy. Enel Green Power is a leader in hybrid renewable + storage projects with five such plants currently under construction in Texas.

Currently, Enel Green Power has over 2.3 GW of wind and solar capacity and around 600 MW of battery storage under construction across the U.S.

More is coming. And more potentially is coming to New Jersey too, according to Nick Coil, Enel’s senior director of regional development for the Northeast region.

“Our company has ambitious growth plans over the next several years,” he said. “When we evaluate new areas to develop projects, we consider a variety of factors including a favorable policy environment, access to points of interconnection and interested landowners.

“As the cost of solar continues to fall, we believe New Jersey is well-positioned to take advantage of this growing sustainable resource.”

Papadimitriou said the company is eager to grow here.

“Relying on our world-leading expertise and community-first development approach, we look forward to building responsibly sited solar plants in communities across the Garden State,” he said.

How many include sheep remains to be seen.