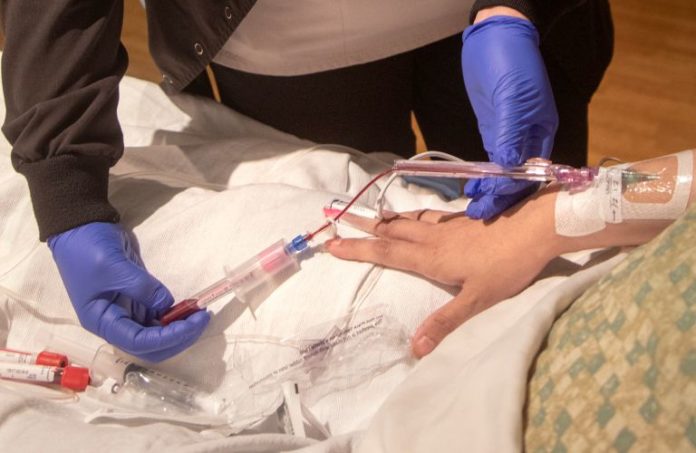 Franklin Lakes-based BD attracted attention from health care providers around the state earlier this week, when it announced it had acquired Velano Vascular — an innovative company that created PIVO, a breakthrough blood-draw technology that promises to create one-stick hospital stays.

Michele Acito, the chief nursing officer at Holy Name Medical Center in Teaneck, said she has seen the device in use firsthand — and acknowledges it has had a huge impact since the hospital began using it in January.

“The patients, especially those who have been in a hospital before, cannot believe it,” she said. “There’s no pinch, there are no needles. They are so happy that they tell everybody about it.”

“The nurses and the phlebotomists are thrilled,” she said. “Now, the access to a vein is already there. There’s no more worrying about whether the patient’s hydrated, or if they are going to get the vein or leave a bruise.”

Then there’s this, Acito said:

“The patient doesn’t even have to be woken up for a blood draw,” she said. “We can do it without disturbing their sleep, which is always a common complaint.”

Acito describes the PIVO product as being like a capital “Y.”

“The bottom of the capital letter is in the vein,” she said. “And then the two tails of the Y are sticking out of the patient. One is where the IV connects. The other one is where the blood is drawn from.

“Every patient that comes in gets one. So, now, patients are stuck just once — and it allows us to give medications and to draw blood without sticking the patient.”

The product has saved thousands of needles — and countless more needle sticks. And not just in the patient.

“Even though we have every measure put in place to protect the staff from needle sticks, it’s still a reality,” Acito said.

So is needle anxiety. And, again, not just with patients, Acito said.

“Drawing blood is not a joy,” she said. “When you do it the old-fashioned way, you have to put the tourniquet on, you have to clean the area, then you have to do the needle stick. And, if you miss, there is anxiety. You feel, ‘I failed the patient.’”

Acito said these are just some of the reasons Holy Name jumped at the opportunity to begin using the product.

“We always want to be the most innovative and on the cutting edge at Holy Name,” she said. “So, as soon as we heard about it, we wanted to jump right in. We started using it in January and have not stopped since. It’s really an amazing product.’