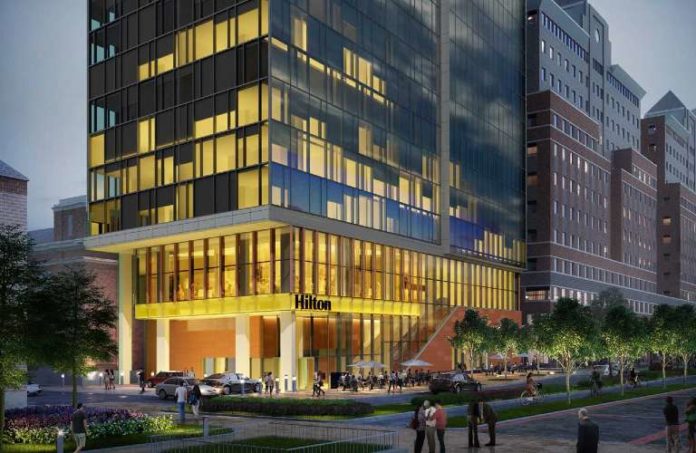 A Hilton hotel in Hoboken — first proposed in 2017 — appears to finally be close to reality after the city council seemingly cleared the last hurdle during a meeting earlier this month.

The 20-story, 349-room hotel, which will be located on waterfront property behind the Frank Sinatra Post Office, has been held up by numerous issues and lawsuits — not to mention the pandemic. The city council, on July 7, overcame the last hurdle, approving a lease agreement regarding a post office parking lot on the proposed site of the hotel.

Philadelphia-based KMS Development is the lead developer. New York-based Cooper Carry is the architect. The story was first reported in Jersey Digs.

Hoboken Councilman Phil Cohen said he’s happy to see the project get closer to a groundbreaking.

“This project, approved by Mayor (Ravi) Bhalla and the city council before I joined the council, is happily showing signs of life,” he said.

“Opportunistic litigation initiated by the Hilton’s neighbors followed by the COVID pandemic have been a one-two punch that slowed progress on this much-needed project that will generate significant economic activity and municipal tax revenues.”

According to Jersey Digs, the property will feature a second-floor restaurant and bar overlooking 1st Street, plus a 959-square-foot ground-floor retail space fronting Sinatra Drive.

In addition, the top floor of the hotel will have a bar and an event space that includes a nearly 3,000-square-foot outdoor terrace.

There also will be meeting spaces and a ballroom on the 18th and 19th floors.

KMS, which has not commented on the approvals, also is expected to contribute more than $1 million in neighborhood upgrades the area, including sidewalks, landscaping and utilities.

“When realized, the Hilton project will create a brand-new waterfront hotel on an underutilized property that has heretofore done little more than provide private parking for U.S. post office vehicles and been off-limits to Hoboken residents.”