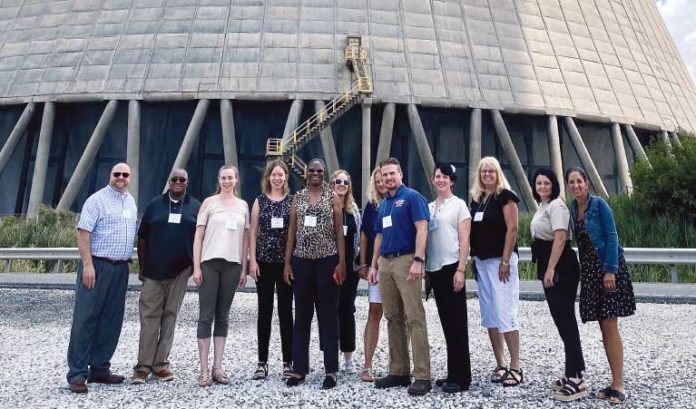 Roger Roslowski was not very familiar with Mannington Mills.

Roslowski, a business teacher at Cinnaminson High School in Burlington County, knew little about the fourth-generation family business based in Salem, other than the fact it had “something to do with flooring.”

That has now changed.

Thanks to the South Jersey Summer Institute for Educators, a two-week program organized by the Chamber of Commerce Southern New Jersey earlier this month, Roslowski and 11 other teachers in the region met with officials from Mannington Mills and other businesses in South Jersey — both in person and online — to learn more about what these key companies do.

And, more importantly, to increase the interaction between business and education in the South Jersey region.

“I learned so many real-life things that I can incorporate into my curriculum,” Roslowski said. “I will be taking so much back to the classroom.”

Included in that will be real-life opportunities for students who will make up the next-generation workforce. This is the hope of the nearly three-decade-old program that affectionately is known as “Teach the Teachers.”

Chamber President Christina Renna said the overall goal is to increase all-around awareness about the South Jersey economy, including the types of jobs that are available and the skills needed to fill them.

“It’s essentially a reverse internship program,” she said. “Instead of bringing the students into the businesses, the businesses host the teachers, show them what their operation is, teach them the skill sets they’re looking to hire and then have them trickle that down to their students.

“The teachers are carrying these lessons back to the classrooms and preparing their students to be part of the future workforce, hopefully in South Jersey.”

The program started in 1991 as the brainchild of an executive at the former Mobil refinery in Paulsboro. The South Jersey chamber took over the program a few years later and has been running it ever since.

This year, the course was modified just a bit. Instead of three weeks, the program went for only two. Instead of 18 teachers, there were only 12. And instead of all on-site tours, the program had nine in-person tours and a half-dozen virtual presentations.

Renna said the impact of the program, which ended last week, remained the same.

“The teachers couldn’t believe how much businesses want to interact with them,” she said. “Everywhere we went, they rolled out the red carpet, told stories of how teachers had impacted their lives and had their top executives meet with them.”

The group visited with many of the major players in the region from a variety of sectors, including Subaru, Campbell’s, Lockheed Martin, NJM, M&T Bank, Rowan University and South Jersey Gas, among others. They also met with various economic development groups.

At each stop, the teachers learned about what types of jobs there are — and what degrees, if any, are required to get them.

Throughout the program, the teachers were writing updated curriculum based on what they are hearing, Renna said. And that curriculum includes more than just coursework.

“They’re hearing about the soft skills students often are missing,” Renna said. “The ability to communicate, have a conversation, shake someone’s hand and make eye contact.”

“This year, I had a Latin teacher, an English teacher and a special education teacher — but I also had five business teachers and people who teach AP calculus and AP chemistry,” she said. “So, it’s a good mix.”

Businesses in the region appear to like the program as much as the teachers. Renna said she has a waiting list of companies that are eager to sponsor the program.

“It’s the most popular program we have,” she said.

Betsy Amoroso, the senior director of corporate communications at Mannington Mills, said the company has been thrilled to be involved since the beginning.

“We’ve been involved in promoting education and the educational opportunities to people in South Jersey for generations,” she said. “So, it was really kind of a natural fit for us to participate with the chamber with this program.”

Amoroso said the company loves to let educators know just how diverse the company is in terms of the jobs it does and the people it hires. It’s more than just folks who sell and install various types of flooring, she said.

“We have a unique situation because we have both manufacturing and office functions on site,” she said. “When we host this group, we try to show them the breadth of occupational opportunities that would be available to people, because the goal is really for people who are educated in South Jersey to stay in South Jersey.

“We like to showcase the things that Mannington offers in terms of career opportunities. That’s everything from manufacturing and operations to office positions, like finance and marketing, and even people with artistic talent. Flooring is really a decorative product, so our designers have an art school background.”

More than anything, Amoroso said it’s a way for a 106-year-old company to continually introduce itself to the region.

“We always get people who say, ‘I’ve driven down Route 45 for years and have seen the sign on the road, but I never had an idea just how expansive the company is,’” she said.

Roslowski, a veteran teacher who just completed his first year as a teacher of various business and marketing courses at Cinnaminson, was one of those people. He said the program was eye-opening in many ways.

“I’m going to include Mannington Mills as part of my marketing class now,” he said. “They not only gave me some great examples of the careers that they have, that you probably wouldn’t think of, but they made me realize we don’t talk enough about careers with our kids.”

Here’s what Roslowski said he means.

“Where I teach, a good majority of graduating seniors do move on to college — and they all say they want to study business or finance or want to be a scientist, things like that,” he said. “That’s a good thing.

“This program really opened my eyes to the fact that we don’t ask them what their end goal is: Where do they want to work? It’s great that they want to be an accountant, but where? And are there companies around here that I can start having them network with before they graduate high school, which may help them get an internship in college and a job when they graduate?”

The program has graduated more than 600 teachers. Yes, there’s a celebratory dinner at the end. Renna estimates those graduates have reached more than 60,000 students.

And, while the program is called the Summer Institute for Educators, Renna said everyone involved learns a great deal.

“I am someone who is intimately involved in all aspects of the business community, and I learn something new every day,” she said. “And the companies all tell us: This is the favorite thing they do all year.

“It’s just a really cool program that has incredible impact.”

Teachers participating in the South Jersey Summer Institute for Educators, a two-week program where they interact with the business community, met with many of the top companies in South Jersey, including: