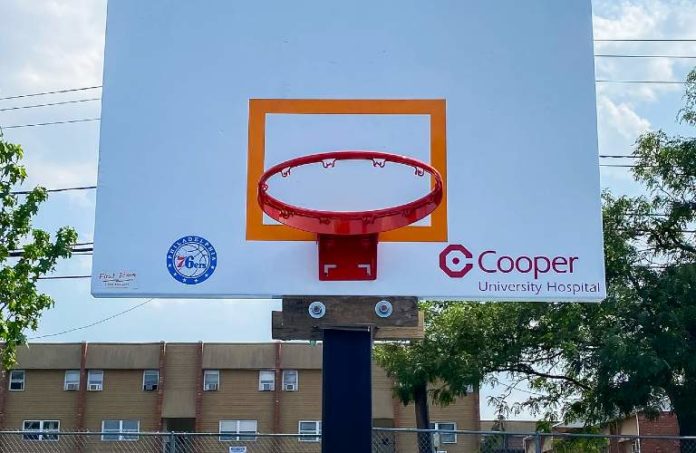 Cooper University Health Care and the Philadelphia 76ers have teamed up to renovate and upgrade the basketball court at Dominick Andujar Park in Camden as part of a community partnership between the two organizations.

Officials from both groups said the basketball court rebuild is one of a number of initiatives the two organizations have teamed up together to support families in the city of Camden.

George Norcross, chairman of the Cooper board of trustees, said it’s an example of teamwork.

“From its support of Cooper during the pandemic to its work on creative community initiatives like rebuilding a basketball court for the public’s use, the 76ers are a perfect example of how the city’s employers are working together to improve the quality of life for residents in Camden,” Norcross said.

“We are thankful to our partners at Cooper University Health Care for joining us in creating a safe place for our youth to play and build healthy habits,” he said. “We believe it is our responsibility to serve our local communities, and Cooper has always shared in that mission. Cooper’s drive for positive change in Camden inspires the entire community and we love being involved as a true partner.”

Since partnering in early 2020, Cooper and the 76ers have worked on numerous community projects together.

Earlier this summer, Cooper team members and the 76ers took part in the “Project 76” initiative that focused on numerous refurbishments efforts at Cooper’s Poynt School. Also in June, the two organizations offered a multiday youth basketball clinic at the Salvation Army Kroc Center in East Camden, which provided health and nutrition education along with basketball instruction.

Cooper co-CEO Kevin O’Dowd said the continued efforts are a sign of the organizations’ commitment to the area.

“Working together, Cooper and the 76ers are proud to offer a much-improved recreational space which will enhance this North Camden neighborhood,” he said. “This joint effort demonstrates Cooper’s and the 76ers’ commitment to continually transform Camden into a vibrant city for those who live, work and go to school here.”