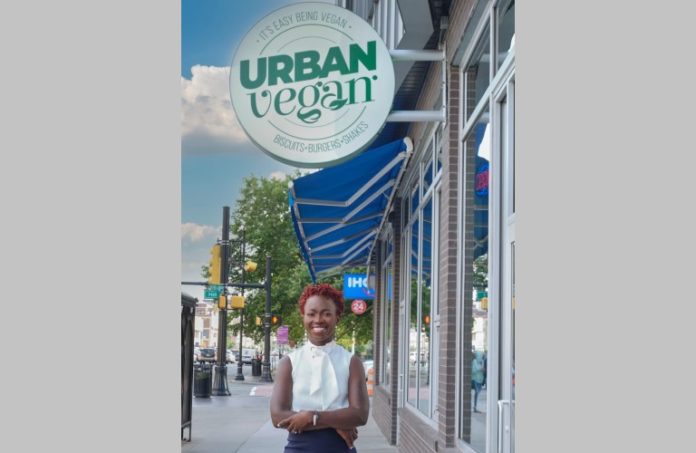 Urban Vegan, a fast-casual eatery offering vegan dishes made from locally sourced ingredients served fresh in a family-friendly environment, will hold a ribbon-cutting Thursday at 915 Broad St. in Newark.

The latest entrepreneurial effort by Adenah Bayoh, Urban Vegan was created in collaboration with Emeka Onugha, who will serve as creative director/culinary designer.

The menu will be 100% vegan and include organic biscuits made from scratch, an oat-based Philly cheese steak and a variety of burgers. In addition, Urban Vegan will offer all-natural, no-sugar-added fruit shakes.

The restaurant will be located at the 84-unit mixed-income, mixed-use project Bayoh developed. It will be next to Cornbread Newark, a farm-to-table soul food restaurant Bayoh opened with co-founder Zadie B. Smith earlier this year, to much fanfare.

For Bayoh, Urban Vegan represents another milestone in her efforts as an entrepreneurial force in Newark and the region.

“I’m passionate about bringing a variety of high-quality meals and hospitality services to urban communities like Newark,” she told ROI-NJ. “While we only serve vegan dishes, I know everyone will love our food, thanks to our amazing culinary designer, Emeka Onugha.”

The 10 a.m. ribbon-cutting is expected to be attended by Newark Mayor Ras Baraka. The commemoration will include a speaking program followed by the ceremonial ribbon-cutting and a sampling of menu options.

Bayoh, an immigrant from Liberia who grew up in public housing in Newark, said Urban Vegan reflects her commitment to delivering high-quality food and hospitality services to underserved communities.

Urban Vegan is her fourth restaurant in the city and will provide employment opportunities.

“Urban Vegan is truly a labor of love for me,” she said. “I am so grateful to our entire team, who poured their hearts into this restaurant and share my passion for expanding the healthy food options that exist in Newark.

Last week, Bayoh was named to the Top 15 of the ROI Influencers: Food & Beverage 2021 list.

Associations react to likely ban of bags (plastic and paper) and...