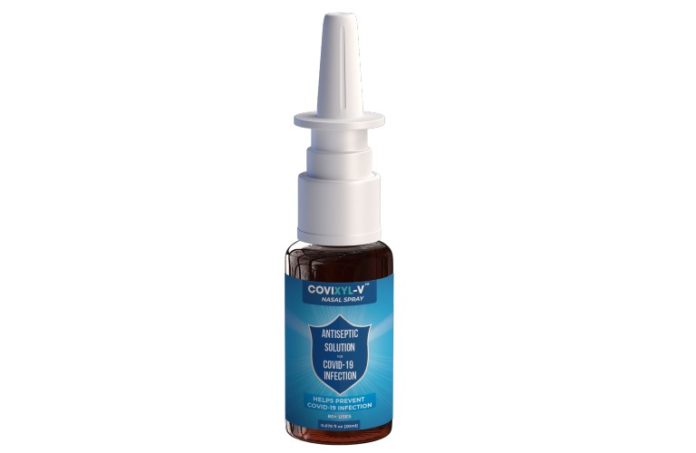 Dr. Abdul Gaffar, the inventor of Covixyl-V, a nasal spray product intended to help in the fight against COVID-19 that’s made by Englewood Cliffs-based Salvacion USA, is very clear:

But, if the nasal spray does get such an approval — and Gaffar and Salvacion USA co-founder Peter Cho fully expect it will — Covixyl-V will be another tool in the fight against COVID-19, they said.

Gaffar said Covixyl-V’s unique formula, ELAH (ethyl lauroyl arginate HCL), is what prevents the virus from attaching to the nasal passages — essentially stopping the virus before it can reach a dangerous level.

“When it gets into nasal passages, it starts replicating very fast,” he said. “And, when it replicates and reaches certain levels, it is able to move to other areas of the body, especially the lungs, where it creates havoc.

“We want to interrupt that process.”

The best part may be this: The product will be available over the counter and at minimal cost.

“It will be somewhere around $15, nothing extraordinary,” Gaffar said. “If we want to have a complement to other preventive measures, it has to be affordable and cost-effective so you can get the vital distribution.”

When it will be available for such distribution is not as certain.

Gaffar said the product’s ingredients already are proving to be safe. Now, the company is waiting for the FDA to finish a review of the data provided by Salvacion USA — and to come to an understanding of how it will be marketed.

“The nasal spray is meant to be a complement to a mask — not instead of it,” he said. “That’s why we are working on the statement on our packaging to make sure we don’t mislead consumers into thinking they can use this to avoid vaccination.”

Once approved, Gaffar and Cho said they already have an FDA-approved manufacturing facility ready to produce Covixyl-V in vast amounts — enough to get it to the major pharmacy chains (such as CVS, Walgreens) in four weeks.

“We have everything set up,” Gaffar said.

Covixyl-V is the only product Salvacion USA produces. And, even though it has not hit the market, Covixyl-V already is getting accolades.

In June, the National Cancer Institute identified Covixyl-V as an innovative technology.

Gaffar recently spoke to ROI-NJ about Covixyl-V. Here’s more of the conversation.

ROI-NJ: Explain Covixyl-V in one sentence.

Dr. Abdul Gaffar: Our product prevents the virus from replicating in the nasal area, the main point of entry of the virus.

ROI: How has the product been studied?

AG: We’ve conducted numerous independent studies in independent laboratories. One was by Bioqual in Rockville, Maryland — they are the company that did studies for Pfizer and Moderna. They did a live study for us using animals. When they put the virus in the nose of animals without our product, they started getting a disease. When they used our product, the treated animals didn’t get the disease and they didn’t get the viral replication. They did not lose weight. And, when they measured the amount of virus by very sophisticated techniques, they found the virus was practically nondetectable.

We are in the process of doing human trials.

ROI: You talked about distribution throughout the U.S., but it seems as if this product would be wanted globally. Have you heard from anyone outside of the country?

ROI: What is your confidence that this will get EUA?

AG: Normally, when the products are being evaluated, they are evaluated on a safety profile and an effectiveness profile — they want to see whether your data support that claim you’re making. So, safety-wise, they’re already established that it is generally considered safe. They are reviewing our data on the effectiveness of this molecule on COVID in terms of nascent delivery, because this is new delivery system, and they want to make sure that all the information we have provide will support the claim.