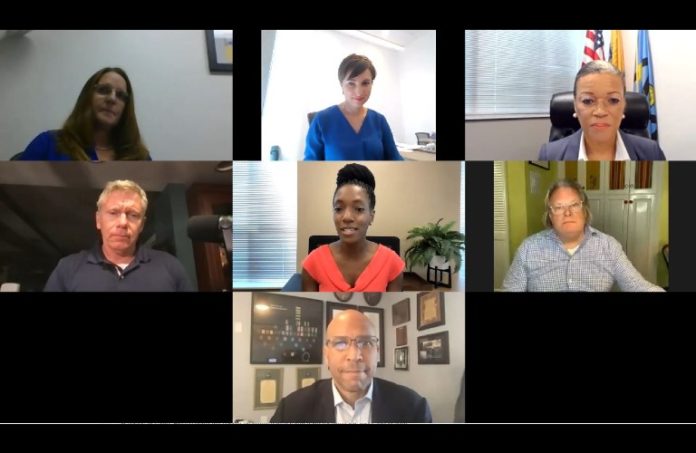 As the COVID-19 pandemic raged last summer, forcing residents to stay in their homes — or, more, stay out of restaurants — almost every food establishment around the state were forced to answer the most basic of questions: How do we stay open?

David Burke, owner of Orchard Park in East Brunswick, was left to ponder something else: Should I even open?

That’s right — Burke was in the middle of launching Orchard Park when the pandemic took over the state last spring and summer. But, at a time when most business owners would have put their plans on hold, he decided to carry on.

Burke didn’t use the pandemic to implement a proverbial pivot of his business model, he used it to reexamine how he was going to do business — seizing it as learning lesson for the future.

“Normally, a restaurant opens and you’re over budget and you’re understaffed,” he said. “You spent 90 days before you open killing yourself, and then you’ve got to really perform.”

That was the case at Orchard Park, Burke said.

“We had limited capacity, which means a limited amount of customers — and that gave us time to teach our chefs or cooks or waiters or busboys or bartenders how to do things correctly,” he said.

“The silver lining was, we learned that opening a restaurant that way was the best way to open a restaurant, because we got to practice.”

Burke told his story on a recent webinar by Middlesex County, “Leading Where We Live.” The event, the first of the county’s inaugural business series, was held virtually. The county hopes the next installment, “Leading Locally in the Fourth Industrial Revolution,” will be held in-person.

Burke’s story was just one example of how Middlesex County businesses changed their game. It was about surviving, they said, but it also presented an opportunity to reimagine their efforts. In doing so, they not only got a spark of creativity — they found practices they intend to maintain going forward.

That’s the way Vinnie Brand, the longtime owner of the Stress Factory, saw it.

When the pandemic shut down most of New Brunswick, Brand took a look at his business model and immediately saw its major flaws, he said.

Simply put, the Stress Factory relied on entertaining people in person and attracting an audience from people living within 45 minutes of its location.

With COVID, the first idea was eliminated — and the second needed to be modernized.

“We determined early that we wanted to try and expand our online presence and find a way to remain relevant to our customers,” he said.

While this could help during the height of the pandemic, Brand realized it could have staying power, too. That was key, Brand said. He needed to find a way for customers to remember his establishment post-pandemic.

“So, we started an online show in our club,” he said. “Nobody was there. Just a couple of cameras, telling stories and entertaining our customers.”

Then came the marketing.

“We reached out and said, ‘Listen, we know you’re trapped in your house, so here’s something you can watch that’s going to give you something else to enjoy.’ And we immediately connected with pretty large number of people.”

Connecting with people was the goal for Lindsay Erben, the director of the Arts Institute of Middlesex County.

Erben said the pandemic showed residents the impact of art.

“I think the general community got to see how important all these things were in their lives to sustaining their mental health, to education, to entertainment,” she said. “We were really at the forefront.”

The pandemic, she said, actually made it easier.

“As far as virtual events, there’s been no better time than now,” she said. “Everybody has access now. Those who didn’t necessarily have access — in senior homes or in underserved schools — suddenly had access.”

That access, Erben found, extended far outside of the country, proving that art truly is universal.

“We were able to reach people across the world, and reach audiences that we would have never have imagined touching,” she said.

This includes people in India and Jamaica, among other countries.

“It was a fascinating shift for us,” she said.

So, it began holding a series of meetings with business owners — both as a group and individually — to see how the city could help.

Stefanek said the meetings were invaluable.

“The dialogue was vital in sharing information and taking away new ideas on how businesses thrive, especially for businesses that needed to figure out how to sell online or purchase supplies for offering takeout,” she said.

The meetings, she said, even spurred conversations among business owners.

“It strengthened relationships between our businesses, which was really inspiring,” she said.

The local business owners on the webinar acknowledged that their models will never be the same. But they are confident the pandemic has helped them adjust their models for the better.

Even if it was rough going for a while.

Looking back, Burke can only joke about the experience of opening during a pandemic.

“The bar was closed, we had limited seating, the outdoor patio was not yet complete — and we couldn’t hold parties,” he said. “We were wondering how we could make money, which is a key component in the restaurant business.”

Oh, and there was no opportunity for opening-week publicity or reviews to draw much-needed attention.

“Word of mouth is still the best way to get people into the seats, because it’s more trusted than a Yelp review or a review in the local paper,” he said.

Soon, he said, he had customers from local communities such as East Brunswick, New Brunswick, Monroe and Sayreville.

“They just came out and supported us,” he said.

Which is more than Brand had early on.

He joked about the online experience.

“We were paying comedians to stand in an empty room and tell jokes, with zero feedback,” he said.

“We were in the survive-to-thrive mode,” he said. “I think that was the most important aspect for us.”

Manufacturing Cares Food Drive tops $700K — here’s how you can...

Why we still support the gas tax — even with the...