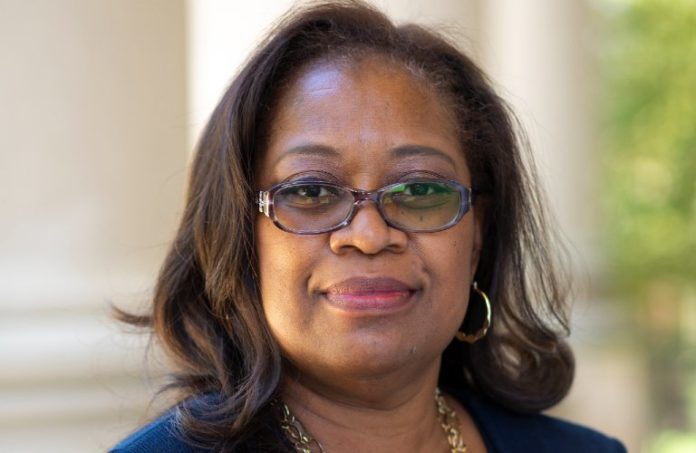 Pamela Scott-Johnson began her role as provost and senior vice president for academic affairs at Monmouth University on Monday with one goal in mind: Helping the students better understand how their skills and talents will translate into future economies.

“I look forward to partnering with faculty to advance Monmouth’s tradition of excellence in teaching, and engaging our students to become co-creators of knowledge,” she said. “Together, we will design an exciting and innovative curriculum that helps all of our students have clarity about how their skills, their gifts and their talents fit into the new economy.”

Scott-Johnson, who was selected for the job in the spring after a nationwide search, comes to Monmouth from California State University, Los Angeles, where she served as the dean of the College of Natural and Social Sciences for five years.

At Cal State LA, Scott-Johnson led the largest college at the university, with more than 150 faculty members in 12 departments serving nearly 6,000 undergraduate and 500 graduate students. Recognized as one of the nation’s most innovative institutions of higher education, the university earned a No. 1 ranking for upward mobility from the New York Times. During her tenure at Cal State LA, Scott-Johnson focused on establishing instrumental corporate and community partnerships.

Scott-Johnson has published widely in professional journals and has been principal investigator for a large number of research and program development grants, totaling more than $5 million. Her research interests include eating disorders, body image and sensory systems, as well as increasing the number of minority students in the psychology pipeline.

“I am delighted that Dr. Scott-Johnson will lead our strategic efforts to invest in academic excellence,” he said. “Her vision and experience will help us develop new, high-quality, market-relevant undergraduate and graduate programs that meet the needs of a rapidly changing student body. Her commitment to teaching and research excellence will be critical as we transition from a top-tier regional institution to a national university with a growing portfolio of doctoral programs.”

Prior to joining Cal State LA, Scott-Johnson spent nearly 15 years at Morgan State University, Baltimore, serving as the interim dean of the College of Liberal Arts, as chair of the Department of Psychology, professor of psychology and founding director of the psychometrics graduate program. Previously, she spent 10 years as a faculty member at Spelman College, Atlanta, where she earned tenure.

Before transitioning to higher education three decades ago, Scott-Johnson worked for nearly nine years in the corporate sector as a senior research scientist for Kraft General Foods, where she was an expert on taste and smell.

Scott-Johnson has New Jersey ties, too, having earned master’s and doctoral degrees in psychology and neuroscience from Princeton University.