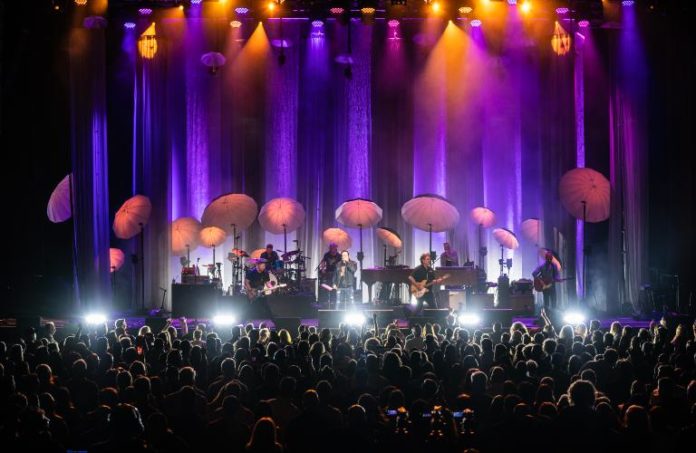 After the Counting Crows finished the encore of a two-hour set Saturday night at the Hard Rock Hotel & Casino Atlantic City, lead singer Adam Duritz spoke briefly to the crowd at Etess Arena.

Thanks for coming out, he said. It meant the world to the band.

It was the first show for the Counting Crows in two years — and they appreciated the chance to play in front of a live crowd again, Duritz said.

Then he explained why the Counting Crows appeared to be in mid-tour form: The Hard Rock had put the band up for 10 days — and gave them daily use of the stage to rehearse. And did it free of charge.

Duritz said he was touched by the gesture, called it unprecedented in the industry — and jokingly noted how much the band needed the practice after such a long layoff.

Mike Woodside, vice president of entertainment and marketing services at the Hard Rock, said he was humbled by the public acknowledgement. He also said it represents the relationship the venue wants to have with the industry.

“This was us following through on the promise that we’re going to be the entertainment destination in the region — not just for the customers, but for the artists,” he said. “We consider it a partnership.”

Now, more than ever, Woodside said.

“Coming off COVID has led to challenging times for a lot of these bands, who have not been working together for quite some time,” he said. “They reached out, told us they were kicking their tour off and wanted to know if we had space available. And, thankfully, we did.”

Woodside said he knows the gesture will makes its way around the industry, helping the Hard Rock solidify its already stellar reputation. But that wasn’t the reason the facility put up the band for 10 days while giving it ample rehearsal time, he said.

“It was just the right thing to do,” he said. “Counting Crows has been here before, and they always do a great show and we’ve got a great relationship with them. We had the space — it was a rare occasion when we didn’t have anything in the arena for a few days — so, we were happy to offer that courtesy to them.”

The show was just the first of many big acts that are coming to Hard Rock this fall — a wide variety of groups including Frankie Valli, Kiss, Pitbull, Bill Burr, numerous country acts and, perhaps the biggest, a two-night engagement with Guns N’ Roses.

Woodside talked with ROI-NJ about entertainment during the era of COVID. Here’s part of the conversation, edited for space and clarity.

ROI-NJ: All casinos have some sort of entertainment venue. We’re guessing this gesture with the Counting Crows will show the importance Hard Rock places on its entertainment.

Mike Woodside: Absolutely. We want to make sure that we’re known as being friendly to the entertainment business. Live music, live entertainment is part of our DNA at the Hard Rock. It’s why have the biggest venue (7,000 capacity) in Atlantic City.

But it’s more than just the Etess Arena; we have the Sound Waves theater, which seats 1,300, and five other live theaters going on concurrently. So, anywhere you go in the building, there’s some kind of party being held. We try to keep that level of energy everywhere.

ROI: We’re guessing that energy is going to be pretty high with some of the headliners you have coming: Kiss, Pitbull and especially Guns N’ Roses. They just played for 40,000 at MetLife Stadium. How did you land them — and how loud a show is that going to be?

MW: Guns N’ Roses is going to be a great show for us; we’re very excited about it. It really comes down to our partnership with Hard Rock International and the Seminole tribe down in Florida. Because we’ve got so many Hard Rock properties across the country, and because of the relationships that we have all across the country, it allows us to secure an act like that. So, we are super excited.

It’s one thing to see them at Hersheypark or MetLife Stadium, but to see them with just 7,000 people is going to be incredible. It’s going to be one of the bigger shows to ever play Atlantic City, and we’re just very proud to have it.

ROI: Of course, a not-so-secret aspect of the live entertainment industry is the draw of country music. You’ve got a number of big acts coming — from Toby Keith on Labor Day Weekend to something called Stripped Down Country (Randy Houser, Tyler Farr, Ernest, Tyler Reeve and Cole Taylor) next weekend.

MW: We love having country shows. We try to have 4-5 a year. It’s always a good time and a good party atmosphere. We’re really excited about Stripped Down Country, which will feature former PGA Tour great John Daly, too.

It certainly will be different, but New Jersey is a very diverse market. We have so many different kinds of customers. This is just another way to cater to that.

ROI: Building a diverse schedule is challenging during normal times. We’re guessing coming off the COVID shutdown, it has had to be more challenging than ever?

MW: It has been. You can go back to last spring, when we were shut down for about three months. We had to postpone, cancel or reschedule hundreds of shows. Some of them, we just pushed out further on the calendar, so we’ve always had a good base. But, when Gov. Murphy opened things up again, we had new shows looking to come out. We had a flood of interest of people coming in wanting to play Hard Rock Atlantic City because we have the biggest venue in Atlantic City by far. So, the calendar certainly has been a challenge.

ROI: COVID-19, of course, isn’t behind us. In fact, it may never be completely behind us. Talk about doing live shows in this era?

We want to make sure that our customers feel safe, but also that our artists feel safe. If bands have concerns about safety, we’ll get on the phone and see what will make them feel comfortable, whether it’s requiring our employees that are backstage to wear a mask or anything else they need. We’re doing it on a case-by-case basis right now.

The same goes for vaccinations and masking. We’ve done a great job with vaccination incentive programs for our employees to make sure that all of our employees feel comfortable being here. As of now, masking is optional — it’s a matter of what people feel comfortable with. And, if the governor comes down with any mandates, then, of course, we’ll follow them, but, right now, we’re taking all of our tours on a case-by-case basis.

ROI: Through all this, there is only certainty: It’s hard to top Frankie Valli playing in Jersey. He’ll be at the Hard Rock for two shows this weekend. How cool is that?

MW: Frankie Valli is a legend. He’s an icon. He’s been a great friend of the property and he always puts on an amazing show. People still love him. And there’s enough demand for him to play two arena shows. That shows how big he still is.