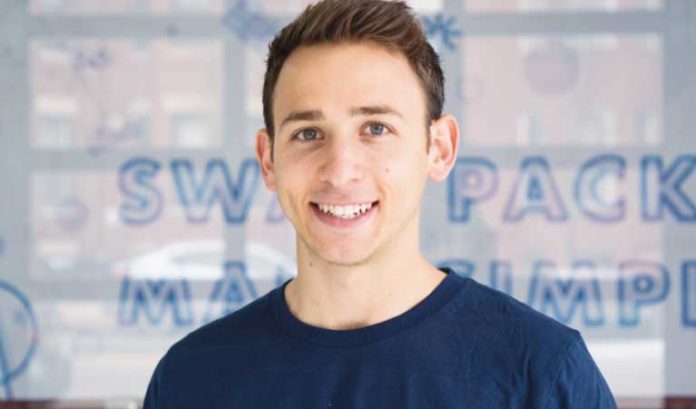 All the cliché characteristics that come with being a stunningly successful young entrepreneur can be found in the biography of Michael Martocci, the 26-year-old founder and CEO of Piscataway-based SwagUp:

“This definitely can be a billion-dollar business,” Martocci said. “Definitely.”

SwagUp, founded in 2017, certainly has been drawing attention.

It counts Google, Facebook, Walmart, Netflix, Harvard University and Stanford University among its more than 3,000 clients. Martocci was named a Forbes 30 Under 30 for the Class of 2021. And the company recently was named a winner of EY’s 2021 Entrepreneur of the Year for New Jersey.

Last week, SwagUp earned the No. 23 spot on the Inc. 5000 — a listing of the fastest-growing private companies in the country.

Martocci measures it this way: He quickly outgrew warehouses in Linden and Union City — warehouses he thought would be big enough for years — before settling into a 40,000-square-foot facility in Piscataway last summer. Along the way, the company has hired approximately 175 employees, half of which work in New Jersey.

Martocci is a Jersey guy. He grew up in Aberdeen and graduated from St. John Vianney in Holmdel. He said he loves the state — he just wonders why he hasn’t been getting any love back.

Despite his meteoric rise — creating the type of company Gov. Phil Murphy repeatedly has said he wants to build an innovative economy around — Martocci said he has yet to hear from a government official.

“We’ve hired a bunch of people and I’ve never heard from anyone, either in the city that we have had the business or at the state level,” he said.

Will that mean the company will one day leave the state? It’s too early to tell, Martocci said.

This much is clear: SwagUp seemingly has the potential to be the type of startup success story that all states dream of having.

Swag is the promotional products companies give their employees or give out to potential customers at job fairs, grand openings or corporate events (back when we still had all three). Think T-shirts, pens, backpacks, hats, etc.

Martocci said it’s a $30 billion industry. Nationwide, there are more than 30,000 companies in the game, but most are limited to a single niche — by product or an industry they cater to. Purchasing and distributing these items also is inefficient.

“Historically, some random person in the company gets tasked with being the swag purchaser and distributor,” Martocci said. “They have to buy all the stuff, put it in an empty office or storage closet and throw a random shirt on somebody’s desk when they start.”

Martocci feels SwagUp not only brings a sense of order, but an easy-to-use end-to-end solution that starts with an order on the website. The order gets shipped to vendors, who imprint the various items before sending them to the SwagUp warehouse.

“We don’t take any sort of inventory risk,” he said. “It’s not like we have 1,000 shirts sitting around that are unbranded. The inventory in our facility is only branded for our customers.”

When that inventory comes in, it is quality-checked, then packaged to be shipped out.

“You need to use a company like us to manage this process for you,” he said. “Otherwise, what are you going to do: Send it to your house and have all this stuff in your garage while you work remotely, and then make trips to the post office?”

Martocci is reluctant to admit it, but the pandemic has been great for his brand.

“There’s been a huge growth in just awareness, because people started to look for a solution that we already were providing,” he said.

It’s why he’s confident companies will continue to use SwagUp even after they return to the office.

It started with the classic lemonade stand at age 5. Of course, he sold more than lemonade.

“There’s a picture that I have when I’m 5 years old, standing outside my house on the telephone, looking over my little storefront, which is this table selling yogurts and drinks and whatever my mom bought from the grocery store that day,” he said.

That evolved into shoveling driveways, trading baseball cards on eBay and then buying his first share of stock — at age 13.

That’s where he thought he was headed when he went to William & Mary as a finance major in the fall of 2013. Already familiar with reading books like “The Intelligent Investor” and SEC reports from companies when they went public, Martocci said he was the eager freshman who got into the business school early and ran around meeting all the alumni he could from big banks and hedge funds.

His first internship was at a commodities-trading hedge fund.

Then, an old high school friend called about an idea for an app. It was called Clique. Its goal was to help students have a place where they could encourage other students to meet up. It didn’t go far. But, in an effort to buy promotional material for an event — flags — he saw an opportunity.

He found flags that U.S. printers were selling for $140 cost just $8 from China.

“I told my buddy, ‘Why don’t we just start like a custom printing business on the side while we have this app going — we can just start selling these flags, basically for half the price of a U.S. supplier and get them directly from overseas and just ship them to people,’” he said.

That led to a website for custom printing — and lessons he wasn’t learning at William & Mary.

“I started learning about that supply chain and the different manufacturers in the U.S. that you can go to for your hard goods, like notebooks and bottles, and stuff like that,” he said. “And I just started to realize I’m actually more passionate about starting businesses, not investing, money managing or anything like that.”

By the middle of his junior year, Martocci dropped out of William & Mary.

“I loved my time there,” he said. “I didn’t care about the degree, it was more about, ‘What value do I want to get out of it?’ I got value out of those first two and a half years, and then I was ready to take the next step.”

Martocci learned a big life lesson in his first job after college.

Weatherford Fit, a company he co-founded with former NFL punter Steve Weatherford, was a success for a year, but he quickly realized his enthusiasm level for the venture was greater than that of his partner, who already had made millions of dollars. So, he moved on.

In January 2017, Martocci went to Brand New Matter, a venture capital advisory firm based in New York City. That’s where everything started to come into focus.

“I put two and two together,” he said. “I combined my understanding of the supply chain and how rabid these startups were about their brand and branded merchandise. And then, I looked at the solutions out there, and there really just wasn’t much of anything interesting.”

SwagUp was born five months later as a way to fill that void.

“It’s a very fragmented market,” he said. “There are 30,000 swag distributors in the U.S., but they all kind of basically do the same thing. Nobody’s differentiating.

“I wanted to bring a scalable nature of e-commerce, layer in some services — and then use technology to scale it. That’s basically how it happened.”

His secret to growth, and landing some of the biggest companies, is simple. It’s knowing where to go.

“It’s not like we go to Facebook’s C-level procurement leader and say, ‘We want to be the solution for all Facebook’s branded merchandise buying,’” he said. “It’s more like individual teams throughout the organization find out about SwagUp and say, ‘Wow, this is way easier, we want to start working with SwagUp.’ Then, we infectiously grow within that organization, and they say, ‘I’m going to introduce you to this other team at Facebook, or my friends at Walmart, or my friends at Netflix.’”

He’s eager to say the company can still grow tremendously within the sector — whether that means buying up some of the product manufacturers or creating a white-label solution that other swag companies could license.

And, he is willing to say this: He plans on sticking around awhile.

“Entrepreneurs are very ADHD,” he said. “You constantly have more ideas and new businesses and all these things you want to do. But the interesting thing about this is, I’ve never been in a business where every day I feel like there’s still so much more to do.”

Unlike his competitors, who field mostly sales teams, half of SwagUp’s employees are software engineers, Martocci said.

“This industry is so big, it’s $30 billion top line, but there’s so little technology and so few companies that are doing anything different,” he said. “There’s still so much more for us to do in terms of digitizing this supply chain. This industry is super-inefficient because it’s all these one-to-one connections between 30,000 distributors and hundreds of vendors on the other side. We think of us as like sitting in the middle and connecting all those parties through technology.”

Martocci said he’s eager to see where it all goes.

“I think we have at least five years before we do something different,” he said. “I think that we can definitely go public if we wanted to over the next three to five years as we keep on this pace of growing 2 to 3 times a year.”

But will SwagUp do that in New Jersey?

Martocci said he likes New Jersey — but, he admits, that has a lot to do with the fact that he’s from here.

“To be honest, if we didn’t start in New Jersey and didn’t have a lot of people that already are in a physical operation, there’s nothing that would have helped me to stay there,” he said. “Obviously, I have family there, but, economically, It doesn’t make sense to run the business in New Jersey. The taxes are crazy and there’s not really that many great programs that are incentivizing or encouraging startups.”

Martocci made his comments during a Zoom call. He was in Florida, where the company also has a presence. It’s a presence that will grow. The company projects to have close to 300 employees by the end of 2022.

“As we expand, we’re definitely going to have a bigger office down here in Florida,” he said. “We already have about 20 people down in Florida today; I wouldn’t be surprised if, by the end of next year, we have 40 or 50.”

New Jersey has more benefits than just family, Martocci said. The state’s location and reputation as an e-commerce giant is well deserved, he admits.

It comes at a cost, however. Taxes … labor … warehouse space, he said.

“There’s nobody I can point to that is championing innovation in New Jersey or is an advocate for us,” he said.

It’s different in Florida, he said.

“Frankly, something that I really like about Florida and Miami is that they know who you are, they want to help as much as possible, and they actually have programs in place to help you,” he said. “I just won the New Jersey Entrepreneur of the Year from Ernst & Young a couple of weeks ago, and I’ve never heard one word from the governor on how they want to help.”

Out of the ashes: After fire, amid COVID, two longtime Cherry...