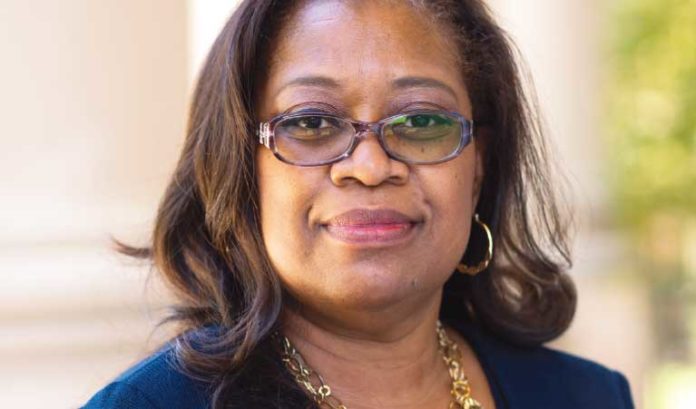 The resume is all there: A Ph.D. in psychology and neuroscience from Princeton University, eight years in the private sector as a research scientist at Kraft, academic leadership roles at Morgan State University and Cal State-Los Angeles, where she was the dean of the College of Natural and Social Sciences — and an expert at getting government grants.

But, if you ask Pamela Scott-Johnson, who started as the provost and senior vice president of academic affairs at Monmouth University earlier this month, the training she needed for the job started long before she got a bachelor’s degree at Spelman College or a high school diploma in South Carolina. It started with the lessons learned from her parents — both of whom were educators with a master’s degree.

It wasn’t the push they gave toward academics — and the watchful eye they had on her academic career. Sure, that helped, she said. But, rather, it was the eventual realization that all kids didn’t have the benefit of that upbringing.

“I’m not a first-generation college student,” she said.

She’s not. And she’s also a mom with two kids — one of whom is pursuing a doctorate. And doing it in a different way than she did.

If you’re thinking Monmouth has hired a different type of leader, you’re right. Scott-Johnson understands the relationship between a teacher and student, a school and a student, and the world and a student is changing rapidly. That makes her the perfect pick for the job. And the perfect jumping-off point for the 2021 ROI Influencers: Higher Education list.

Scott-Johnson is too new to make the list — at least, this year. But many others who share the vision of Monmouth University and its president, Patrick Leahy, did.

There’s Joel Bloom and New Jersey Institute of Technology in Newark and Sue Henderson of New Jersey City University, both of which are models for connecting with their communities. There’s Chris Eisgruber and Princeton, which have used a gift from the Bloomberg Foundation to start a center to not only improve access to the school — but find ways to show others how to do the same. William Paterson University has launched a Center for Socially Responsible Entrepreneurship and Innovation.

Some of the hires have been just as innovative.

Of course, big-shot presidents and innovative programs are only as good as their ability to reach the students.

This is where the training of Scott-Johnson, the psychology professor, comes in.

“This is a generation that has always had a cell phone, they’ve been on Twitter and Instagram — when they send you something, they get annoyed if you don’t respond to it right away,” she said, echoing the thoughts of anyone from an older generation.

“So, this generation is already remarkably different. The discourse that it has had is different. So, helping our students find their voice and being mindful of their voice is the goal.”

All of this comes at a watershed moment in higher education, especially in the Northeast. Colleges and universities finally understand the importance — and, frankly, the benefit — of including more first-generation students in the student body. Helping them find their way is as important as helping them get to the door, Scott-Johnson said.

“These opportunities are opening up for them to influence and impact and empower their communities,” she said. “But we have to think about who the first-generation student is.

“They may not have a parent to say, ‘Let’s see how your schedule looks; perhaps you should try this?’” she said. “So, we have to be that voice in how we design the curriculum, how we create partners and how we find ways for our students to extend themselves — but do it in a way that doesn’t make them feel less.”

This may be the biggest challenge for universities today. It comes at a time when, statistically, the number of high school seniors in the region is on a decline — and the need to increase the number of students with post-high school learning is greater than ever.

Scott-Johnson said she’s eager for the challenge — one she’s been taking on since leaving the corporate world nearly three decades ago.

“One of the things that intrigued me about being in higher education is the opportunity to transform and make a difference,” she said. “We have to think about how we serve our students in ways that will serve our state and our region, but, most of all, them.”

A list of reasons to honor manufacturers: Overdue recognition of sector...