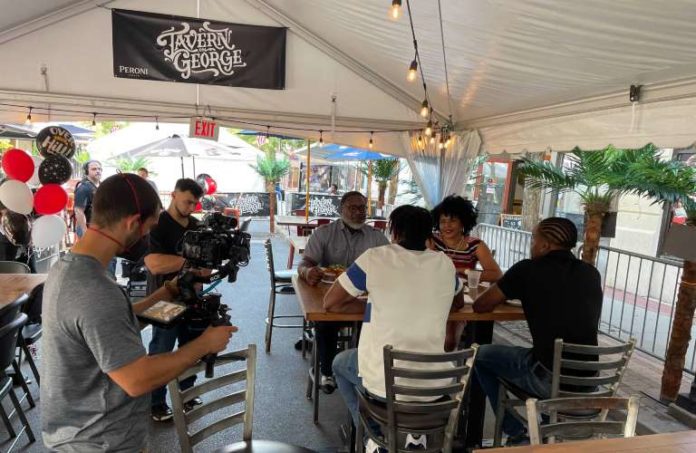 The 3 minute, 40 second video — made to promote New Brunswick as a cool place to visit — certainly gives people a sense of the city as a destination for a football weekend, and a sense of the charisma of Rutgers’ football-playing brothers Bo and Max Melton.

The video, produced by the New Brunswick Development Corp., is the first big example of Rutgers athletes and the New Brunswick community taking advantage of the NCAA’s new Name, Image and Likeness, or NIL, policy, where college students can make money for promotional efforts.

The ultimate goal, however, may not be what you think.

While the video is being slowly rolled out this week across various social channels and numerous email campaigns in time for the school’s opening game against Temple on Sept. 2, it’s more about promoting the city than the big games.

So said Chris Paladino, the president of DEVCO, an alumnus of the school and the developer of numerous big projects on the campus and around the city.

“The goal isn’t to get 5,000 people from the opposing school to come to New Brunswick before the game and have dinner,” he said. “If I could get 100 hotel rooms or 100 more dinners sold, that would be great.

That means Rutgers people. New Jersey people. Folks who are close by, but who don’t currently view New Brunswick as a destination, Paladino said.

“We have to find reasons to introduce people to the city.”

Paladino, who got his undergraduate degree and law degree from Rutgers in the ’80s, said he knows there are plenty of people like him who haven’t seen the city in decades.

“You’d be amazed how many people who went to Rutgers in the ’80s and ’90s still live in the state, but never come back to the school.”

The video gives them reason to.

Bo and Max Melton tour the town with their parents, Gary and Vicky Melton, former Rutgers athletes themselves — and stop to get a bite at Tavern on George, where they discuss old times and new.

There are images of some of the town’s newest attractions, the New Brunswick Performing Arts Center, the Yard, the Honors College and new academic buildings — as well as some of the city’s more famous landmarks, including the Heldrich Hotel and Conference Center, and a variety of restaurants.

Most of all, it’s a pitch that New Brunswick is a place to be. And it’s being made by current athletes. That aspect shouldn’t be forgotten, either, Paladino said.

“NIL is a reality and is a reality that’s here to stay,” he said. “So, how do we help the young men and women at Rutgers use it to their advantage — not just financial gain, but as a learning experience. They, themselves, are a business — what does that mean? What responsibilities do they have to their clients?”

“The Melton brothers were a great place to start,” he said. “They are very charismatic, engaged, responsible young men who everyone can now get to know.

“Hopefully, this will help them build an ambassador relationship with the school.”