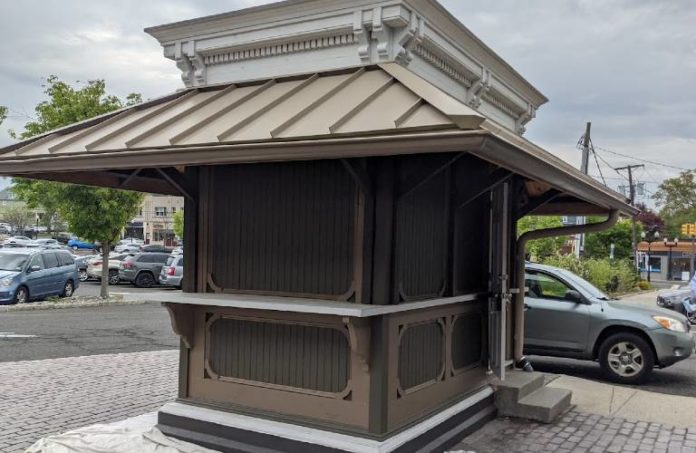 We’re not sure what is the more interesting angle around Boxcar to Go, the latest startup from entrepreneur extraordinaire Joe Colangelo:

Colangelo, who became noteworthy for Boxcar, the commuting service that matched unused parking spots in a town (think churches during the week) with commuters looking for a place to park, feels he has another hit.

Boxcar to Go is an idea he was able to put into play when Westfield refurbished an approximately 150-square-foot kiosk in town and took bids for someone to operate it earlier this month. Colangelo jumped at the chance.

“Our mission here is to create a commuting hub,” he said. “We’re going to start off with coffee and dry cleaning — so, you’ll be able to grab fresh coffee and drop your clothes off before you get on the train, and they’ll be delivered to your door.

“But, we want to add in other concierge services, so that the city commuters can stop by the kiosk and send flowers or get their car detailed.”

The goal, he said, is to make the process seamless. Products and services can be purchased simply by using your name. Or, even more, Colangelo said he’s toying with the idea of selling a one-year-use coffee mug: Get as many cups you like, no questions asked.

The possibilities are endless, he said.

“Once a month, we’re going to offer the opportunity to get your knives sharpened,” he said.

That is, of course, if he can find someone to work a stand that is planning a mid-September start.

“I see it as being like barista jobs, which I think is comparable, but one with a lot less work, because you’re not mixing vanilla lattes and things,” he said.

It also pays more. By intention.

“If a barista job is advertised for $12-18 an hour, we wanted to double it — we wanted someone to say, ‘I can make the same money in a four-hour shift here as an eight-hour shift as a barista,’” he said.

“And we decided that we would overpay for the position, so we can tap into a higher pool of talent.”

The description of the job, which runs from approximately 5:15-9:15 a.m. on weekdays, was sent to all the BoxCar customers in Westfield and Cranford (approximately 2,500) at the beginning of the week. Then, Colangelo started sending it out on social media.

So far, he said, there has only been one applicant.

Colangelo is not concerned. It’s more important to get the right person for the position than any person. The job also comes with the hope that it can morph into full-time work with the company. After all, if the Westfield location proves to be a success, Colangelo has thoughts of opening at other train stations.

And that’s the thinking that led to the idea in the first place. When the pandemic hit — and businesses shut — Colangelo had to pivot. He’s come up with a half-dozen ideas, including grocery delivery.

Colangelo said he’s confident the idea will work because he’s going to partner with proven vendors.

He’s working out a deal for the coffee to be delivered — a few times a day — by the local Boxwood Coffee Roasters. He’ll partner with an area dry cleaner and other service providers.

“We want to be the glue that helps connect the local vendors who maybe don’t have the best technology or marketing,” he said. “We want to help them connect better with these customers, while taking the complexity of booking out of the experience for them.”

Colangelo said there will be a lot of trial and error — and he’s OK with that.

“We never want to get out over our skis,” he said. “The goal is to get through the winter and see what works and what doesn’t work — and then figure out whether we can go to other towns and make this successful.”

But for that, there’s that much-needed employee. The one he views as a key investment — how’s that for feeling appreciated?

“And to make sure that we have somebody that we can trust in there.”

That’s worth every penny.

Casting a vote for all votes being cast on Election Day