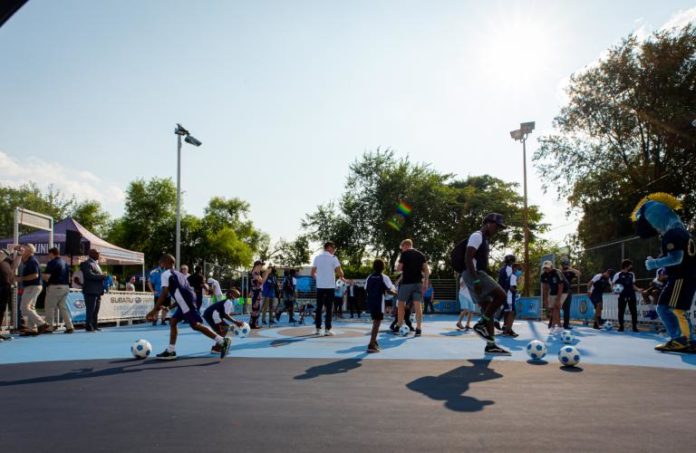 The field is intended to provide a safe place for local youth to learn, practice and play soccer.

Subaru of America is a wholly owned subsidiary of Subaru Corp. of Japan. SOA officials say they are guided by the Subaru Love Promise, which is the company’s vision to show love and respect to everyone, and to support its communities and customers nationwide. Over the past 20 years, SOA has donated more than $200 million and its employees have logged more than 63,000 volunteer hours.

In addition, Subaru made a donation of $10,000 to the YMCA of Greater Philadelphia to support Soccer for Success, a free after-school program that teaches kids in Camden city the fundamentals of soccer and the importance of teamwork while building confidence through soccer coach-mentors and family engagement.

Alan Bethke, senior vice president of marketing at Subaru, said the company always looks for ways to give back to the community.

“Soccer inspires kids all over the world to get outside and have fun, and we’re excited to officially open the Subaru Park Camden Mini-Pitch as a place in the neighborhood where kids in the Camden area can learn one of the world’s most popular sports, develop a love of the game and make lasting memories,” he said.

“We’re also pleased to support youth soccer in our very own backyard with the donation to the YMCA Soccer for Success program, and know this partnership will provide a great opportunity for Camden youth to stay active and gain leadership skills on and off the field.”

Officials from Subaru and the Union said they are committed to supporting the local community with charitable programs that extend the Subaru Love Promise to New Jersey and the greater Philadelphia area.

In April, the pair announced that Subaru Park would be the first zero-landfill MLS stadium as part of the Subaru Loves the Earth initiative. All season long, Subaru and the Union are working together to collect gently used and new soccer gear at Subaru Park and at Philadelphia-area retailers, as part of the Gear for Good Program. The program ties together the opening of the new Mini-Pitch and serves as an extension of the Subaru Loves to Help pillar.