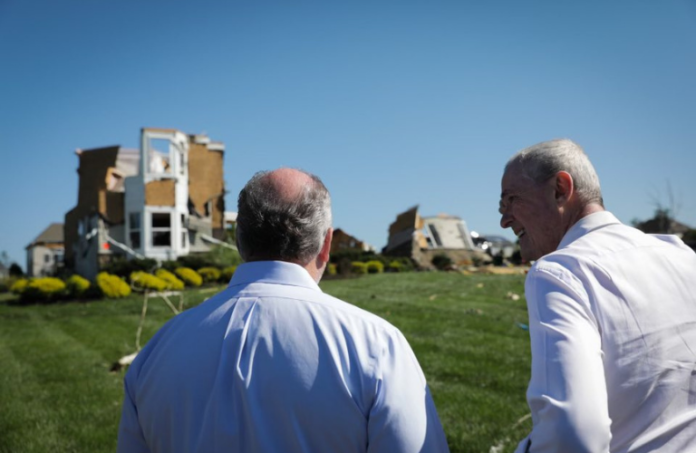 Gov. Phil Murphy, fresh off a tour of some of the destruction caused by Hurricane Ida, said mid-day Thursday that he already has spoken with President Joe Biden and other federal officials about obtaining federal aid to help those impacted by Wednesday’s treacherous storms and tornados.

Murphy, who declared a state of emergency Wednesday night, said the state was in the process of submitting a major disaster declaration to FEMA – a step that will help unlock federal assistance.

Murphy, speaking on WCBS 880 radio just before noon, said he already made requests directly to Biden.

“I said we needed some high-water vehicles; he said he will do everything he can to find them,” Murphy said. “Then I said we needed that major disaster declaration and he committed to get right on it. He’s with us 1,000%. I can’t thank him enough.”

Some parts of the state received as much as 11 inches of rain Wednesday and there were at least three tornados. At least 8 people lost their lives in an weather event that looked like it was straight out of a movie. Unfortunately, it was reality.

Murphy said the images from Gloucester County, which was hit by tornados, were startling.

“It was devastating damage to homes – and the extraordinary juxtaposition of homes that were completely destroyed, standing right beside homes that were untouched,” he said. “So, Mullica Hill, Wenonah, Woodbury, Deptford, those towns down in Gloucester County were crushed.”

The storm did damage throughout the state.

“We were overwhelmed with historic levels of flooding,” Murphy said. “So, we’re in a world of hurt right now. We’ll get back on our feet, but it will take time and we will stand with these folks until we do.”

Murphy said the images of Main Streets up and down the state was incredible. He preached for patience during the cleanup.

“It’s going to take time,” he said. “We’ll stand alongside these folks until we get there. We will get there. But this has been a devastating storm and impact.”

Murphy, who is scheduled to have a live briefing from Hillsborough at 4:30, said utility companies are working quickly to bring back power to the approximately 80,000 people who lost it. At noon, he said the number of homes without power was down to about 50,000.

“It’s not as bad as we had feared,” he said. “But if you’re one of the houses that are without power, that’s little solace to you.

“The service providers believe they can get most of those – and my guess is not all of them – but most of them back in business by the end of the day, and God willing they will.”