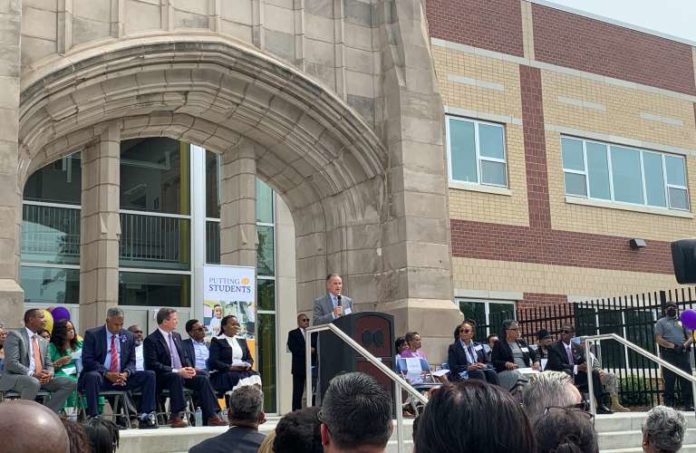 DIGroup Architecture, which has planned and designed many of the state’s most significant educational projects at more than 40 high schools, celebrated the latest addition to its portfolio Tuesday with the ribbon-cutting of the new Camden High School.

As the first public high school to be constructed in over a century in the city of Camden, Venezia said, the building will signal a new era for the students, who will be welcomed into a light-filled, modern learning environment with an abundance of offerings, from classrooms, science and robotic labs, broadcast studios and maker spaces, to performance venues, fitness spaces, locker rooms and courtyards.

“We are thrilled to have once again completed an important project for the urban public-school students of New Jersey here in Camden,” Venezia said. “Creating a safe, secure and sustainable facility connected to its rich and diverse history has been both an honor and a privilege for all of us at DIG.”

DIGroup Architecture is one of the area’s largest minority-owned and disadvantaged architectural firms, specializing in architecture, planning, interior design and environmental graphics, signage and wayfinding services for education, health care, senior living and civic clients. The firm is known for regenerating urban areas through redevelopment, preservation, adaptive reuse and new construction. The company takes great pride in its ethnically and culturally diverse staff, who are passionate about architecture.

Based in New Brunswick, DIGroup Archicture is one of the highest-revenue Black-owned design firms in the country. The Camden High School project adds to an already robust educational portfolio of urban design projects — exceeding $1 billion in construction in the last 10 years.

The firm’s efforts reach into New York City, as well. The New York City Schools Construction Authority has awarded the firm its fifth new school project, for a total of $75 million in construction costs.

The firm’s extensive experience in the specialized needs of today’s varied high school programs, both in traditional settings and technology-rich, career-ready environments, has earned it the reputation as an expert in high school design. Venezia said it is proud to have completed six design-build projects totaling over $415 million in construction costs.