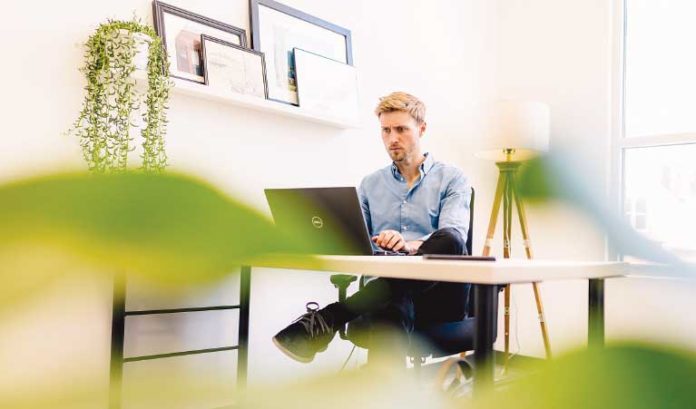 Gerrit Curran has the quick quip that attempts to differentiate desk New Brunswick — the flex office space he and co-founder Alex Burkhead opened this summer — from its competitors in an already-crowded market.

“If you worked in a WeWork — or have been watching the evolution of WeWork — know that, instead of the foosball table, we put the extra money into making sure we had secure Wi-Fi networks and top-of-the-line furniture, like Steelcase chairs,” he said.

Don’t be confused, the approximately 10,000-square-foot space at 37 Easton Ave. has plenty of cool things, including ceiling-to-floor windows throughout and a big meeting area that could host an event for 50-60 people. The space, however, was designed with professionals in mind.

“It’s less of a fraternity-beanbag type of environment and more of a really clean, professional workplace with the highest-end furniture,” Curran said.

It’s an interesting concept, created by Curran and Burkhead, who are both 33 and have dreamed of working together since they met at Roanoke College more than a decade ago. And, while the idea of flexible monthly leases has a post-pandemic feel, this particular idea is years in the making.

But, before you hear their story, here are all the details anyone thinking of finding flex space wants to know:

Of all this, Curran and Burkhead believe the physical space will be the ultimately draw.

“When we set out, I think our core belief was that the open floor plan is great, it looks beautiful, but people really do want some walls, they want some privacy,” Curran said. “So, we’re really skewed heavily toward 1-8 person offices.”

Flexibility is the key, they said.

“We cater toward someone popping in once or twice a week just to get a desk in the common area up to people who are going full-time for a year — and anywhere and everywhere in between,” Burkhead said. “As you grow your business, you can size up into a one-person office and then a 2- to 3-person office, all the way up to a team room.”

Leasing, which started in August, is starting to pick up.

Three offices are occupied, and six agreements are out.

Burkhead, who said they have seen a spike in interest based on the upcoming return to school, said they have been working with a variety of clients, including a construction management company, ad firm, a New York-based recruiter, an AI consulting group and a medtech sales group.

The office users all have taken three-person, windowed offices.

For Burkhead and Curran, the leasing is a signal that the concept that has been percolating as they both made their way through their own careers has merit.

How they got to this point isn’t as simple.

Curran worked for Jersey Mike’s in a role where he helped grow its company footprint in new development markets. After his time with the company, he launched Breakwater Holdings, whose principal business is franchise and small business development.

Burkhead, a veteran of the startup and tech world, has served as a product director for the last seven years. This includes a stint as a business consultant at an incubator in West Africa and Sweden. He also launched and ran a business-to-business logistic software company before getting desk off the ground.

While the two say they will be hands-on in the new venture, they also have hired Tristen Wallace, a recent Rutgers grad, to be director of the space, which will keep him on-site full-time.

Curran and Burkhead said the plan is to introduce more locations in New Jersey and the region. The pair already are looking at Red Bank and Jersey City, as well as Philadelphia; Westchester County, New York; and Fairfield County, Connecticut.

Picking the right space not only is key — it’s part of the business plan. The pair said they intend to bring landlords in as a partner on each venture. For desk New Brunswick, the pair has partnered with Saxum Real Estate in Summit.

It’s another way the idea differs from the WeWorks of the world.

“When we were looking to do this, we had an introduction to Saxum and realized they had a similar vision for the space as we did, so we brought them on as joint partners,” Curran said. “We see this management agreement as the new model for coworking or flex office spaces.

The pair said they hope to continue to work with Saxum, saying its portfolio and growth align well with their vision. However, they plan to scale the company with any landlords looking to upgrade their properties with a flex operation.

“It comes down to finding landlords that have distressed space or space where they can’t seem to find the right tenant love to do something more progressive — or, perhaps, local mom-and-pop-type landlords that are willing to think outside of the box and see the tremendous upside to doing a partnership deal with a company like desk,” Burkhead said.