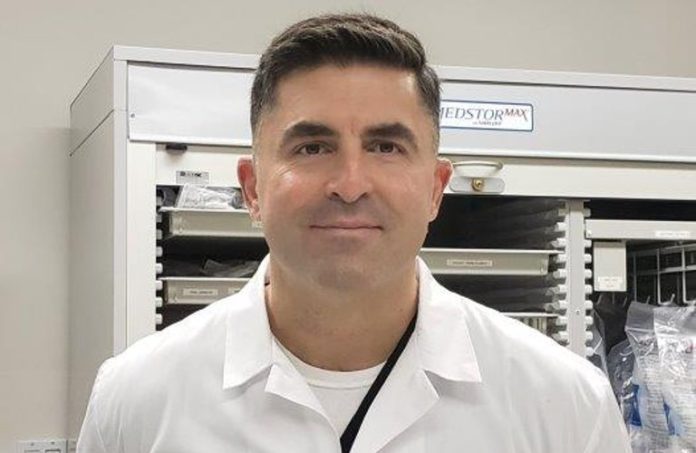 And the treatment option that has made all the difference.

At the height of the pandemic, in March and April 2020, the hospital was at full capacity and treating approximately 200 COVID patients, D’Angelo said.

“It was the most difficult thing that any of us had ever witnessed,” he said.

At that time, there was little that Trinitas could do for non-hospitalized patients.

“We really had no therapeutic options unless you were admitted to the hospital,” D’Angelo said.

The hospital received some assistance last fall, just in time for a second surge in COVID cases, after the U.S Food and Drug Administration granted an Emergency Use Authorization for monoclonal antibody infusion, one of the most advanced therapeutics available to combat the virus.

Monoclonal antibodies are laboratory-produced proteins derived from patients who have recovered from the virus. The antibodies are then given to eligible patients, those who are at risk of serious illness but do not meet hospital admission criteria, via an intravenous infusion.

Former President Donald Trump, and most recently, Texas Gov. Greg Abbott are among the most well-known recipients of such treatment.

It has largely been underutilized throughout the pandemic, as it is a labor-intensive option that requires being in a clinical setting.

Trinitas began offering the treatment in December 2020. D’Angelo said the therapy has been helping to keep COVID patients out of the hospital.

Since it began offering the monoclonal antibody infusions in December, 87.5% of those treated have avoided hospitalization, and 12.5% have returned to then be discharged a few days later. There have been zero deaths among those treated, according to Trinitas.

Trinitas has seen the most benefit in patients who are obese and over the age of 65, and early evaluation is key, D’Angelo said. He also is quick to point out that there is no substitution for prevention.

“The majority of patients who are being admitted to the hospital are the unvaccinated,” D’Angelo said. “The vaccines work. They are holding up, and that’s the real takeaway.”