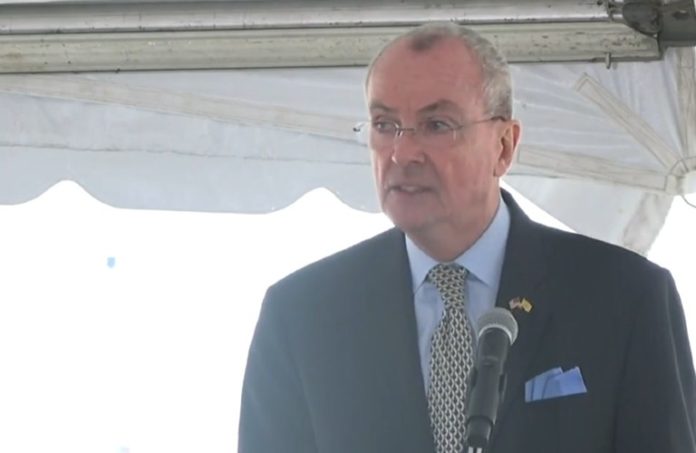 More jobs. And a more sustainable environment. Gov. Phil Murphy said Thursday you can have it all.

Murphy said as much when he was joined by U.S. Secretary of Labor Marty Walsh and other federal, state and local leaders to break ground on the 200-acre New Jersey Wind Port in Lower Alloways Creek Township in Salem County.

“For far too long, we’ve been fed a line that we can either create jobs or improve our environment and fight climate change, but not both,” Murphy said. “Today, I think we can finally put that old way of thinking to bed for good.”

The facility, which has an expected cost of $250 million, will serve as a central location for staging, assembly and manufacturing activities related to offshore wind projects on the East Coast. The port is expected to create up to 1,500 jobs, in addition to hundreds of union construction jobs, and $500 million in economic activity, the governor said.

“We are literally breaking ground on the very future of our state, and this is a tremendous cause for celebration,” Murphy said.

The port will be located on an artificial island on the eastern shores of the Delaware River, southwest of the city of Salem. It is located more than five miles from the nearest New Jersey residential area and provides ample space to grow operations over time.

Major construction is due to start in December 2021, with the goal of opening the port in winter 2023-24.

The state, along with the Wind Institute, created two challenge grants to be awarded to community colleges that will train the skilled labor needed to fill the new jobs created by the project.

The first of those challenge grants was awarded to Atlantic Cape Community College, the governor said, and will include the construction of a 1,700-square-foot training center on the college’s campus.

The second challenge, a grant of up to $1 million to create a New Jersey wind turbine technician training center, is still up for grabs, the governor said.

A union Project Labor Agreement also was signed at the groundbreaking, and the New Jersey Economic Development Authority has set goals of awarding 15% of the contract value to minority-, women- and veteran-owned contractors and 25% to small businesses.

“It will be an economic boon to South Jersey, but especially to Salem County,” Murphy said.

State Senate President Steve Sweeney (D-West Deptford), a native of South Jersey, applauded the benefits the project is going to provide for the state’s second-poorest county.

“This makes Salem County, the smallest county in the state of New Jersey, the wind energy hub for the entire East Coast,” Sweeney said. “That’s pretty cool, and this is just the beginning.”

Walsh used the groundbreaking as an opportunity to tout the benefits that the New Jersey Wind Port will bring to the nation and to advancing President Joe Biden’s clean energy and infrastructure initiatives.

“This project is an opportunity for us to really show a way forward,” Walsh said. “New Jersey is showing a way forward with this project right here, showing us how to do it in the rest of the country.”

Offshore wind is a central component of the state’s Energy Master Plan to achieve 100% clean energy by 2050. As part of that plan — the estimated price of which has yet to be released — the state has committed to producing 7,500 megawatts of offshore wind energy by 2035.

Offshore wind projects slated for development along the East Coast are expected to require more than $150 billion of capital investment by 2035, and the American offshore wind industry is projected to create more than 83,000 jobs, mostly along the Northeast corridor. New Jersey’s location at the heart of the East Coast wind belt, commitment to supporting offshore wind and diverse and highly skilled workforce put the state in a strong position to capitalize on this opportunity.

Long term, the New Jersey Wind Port has the potential for over 150 acres of manufacturing parcels and hundreds of manufacturing jobs. Several potential tenants have already expressed interest in the site, including Ørsted and Atlantic Shores through their winning bids in the New Jersey Board of Public Utilities’ recent offshore wind power solicitation. Both offshore wind developers indicated they intend to build their projects at the Wind Port.

A number of South Jersey elected officials praised the day.

Burzichelli was a prime sponsor in the Assembly of the legislation that set the framework for offshore wind in New Jersey.

ChargEVC head: Cost of EVs could be equivalent to gas-powered cars...