Home Health Care The transplant: Coming to the rescue of a man who rescued thousands...
Facebook
Twitter
Linkedin 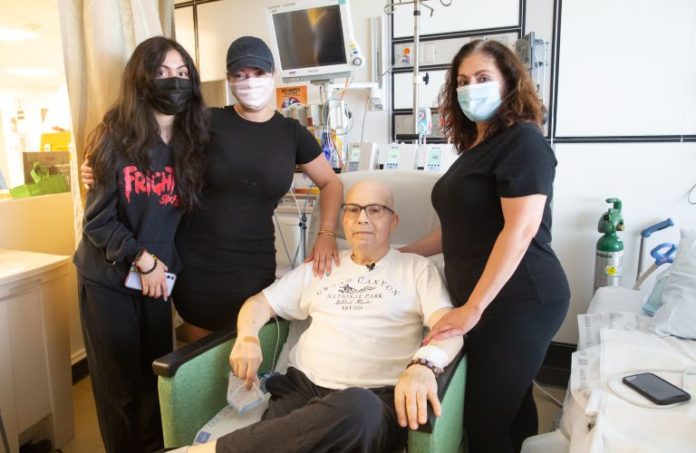 It was from an unknown number. And it was the day before the Fourth of July. Moyet was more concerned with trying to enjoy the holiday, which he knew could be his last.

In January 2018, Moyet was diagnosed with an aggressive form of chronic obstructive pulmonary disease, or COPD. In December 2020, doctors said he had three to six months to live.

He got a little hope when he finally was placed on the national waiting list for an organ transplant. But since that had been less than 24 hours earlier, he never expected to hear from someone so soon.

That’s why the 65-year-old ignored the call. He didn’t want to let another spam call interrupt time with his family, so he went back to chatting with his brother and sister-in-law at his home in Bloomfield.

On that day, there were a lot of unknowns — and only a few certainties.

Moyet, a former ferry boat captain for New York Waterway, helped shuttle hundreds of thousands of people to safety on 9/11 and carried workers and supplies for nearly two years after. His doctors said the dust and debris he inhaled during those countless trips almost certainly led to his condition.

And his only chance of survival was a new pair of lungs.

Like everyone else, Moyet remembers all the little details of Sept. 11, 2001.

He had just ferried approximately 300 people from Hoboken to New York City when he looked up and noticed a gaping hole in the first tower.

“The hole was probably five to seven stories tall, and flames were shooting down the side of the building,” Moyet said.

He got on the radio to inform his manager, but there was no response.

“I called his cell phone and said, ‘Listen, Mike, one of the World Trade Center buildings is on fire. It looks pretty bad. If you want, send boats down in case we need to start evacuating people,’” Moyet said.

Moyet made his way back to Hoboken to pick up another load of commuters. Before they got on the ferry, he made an announcement.

“Excuse me, let me say something,” he remembers telling the crowd. “If you go to the World Financial Center, the police are going to block and cordon off everything. Today is a perfect day for you to take the day off.”

About two-thirds of the commuters left after Moyet’s announcement, but the rest boarded the boat to be transported to their jobs across the river. He had just gotten across the river when the second plane hit.

Moyet’s phone rang a second time July 3, as he sat with his family in the dining room of his Bloomfield home. It again came from an unknown number.

And Moyet again ignored the call.

He remembers his wife, Arlene, coming into the room and cajoling him to answer.

“They just put you on a list,” he remembers her saying. “Do yourself a favor and answer it. You can always hang up after.”

Moyet didn’t want another hassle. That’s what his life had become. He had been on a constant supply of oxygen for more than two years and was taking approximately 17 medications to manage his illness.

He thought he had pneumonia when he went to see his doctor in 2018. His health quickly deteriorated after the COPD diagnosis in January that year.

Moyet tried to get on the organ transplant waiting list in 2019, but he wasn’t sick enough yet to meet the criteria.

He tried to get on the waiting list again in 2020, but the pandemic made it too risky to perform a transplant procedure.

Moyet was running out of time. Others held out hope.

“Don’t worry, dad. You’ll make it through,” Moyet remembers his son saying. “Everything will turn fine.”

Moyet was in the middle of the Hudson on another ferry run when the first tower came crashing down.

“I got on the radio, and I screamed at the boats because I didn’t know if it would fall sideways,” Moyet said. “All I knew was that I could see the top moving.”

Soon after, he couldn’t see anything.

“We were in a blackout from all the dust and all the debris,” he said. “We couldn’t see 2 feet in front of us.”

But that didn’t prevent him working — and joining the biggest maritime rescue in history.

Moyet quickly joined with hundreds of other mariners in evacuating half a million people who were stranded on the piers and battered seawalls of Lower Manhattan. He doesn’t know the exact number of trips he made on Sept. 11, but he knows he didn’t stop running his boat until 3:30 the next morning.

“I did the most trips I could, as quickly as I could,” Moyet said. “I loaded as many people as I could.”

There are other details from that day that Moyet will never forget.

He remembers the fire and the smoke that billowed from the tower as he transported the first commuters of the morning.

He remembers the falling windowpanes that he soon realized were people “because they had arms and legs.”

He remembers the gentleman who stood alone on the bow of his boat.

“Sir, I need you to get off so I can go evacuate more people,” Moyet remembers saying.

The man just stood frozen and in shock.

“I keep calling her, but she doesn’t answer,” the man replied.

As most Americans celebrated Independence Day this year, getting a slight respite from the ongoing pandemic, Dr. Jesus Gomez-Abraham and his team at Newark Beth Israel Medical Center were preparing for a double lung transplant.

Gomez-Abraham, associate surgical director of lung transplantation at Newark Beth, has performed some 850 lung and heart transplants at multiple medical centers across the country.

After a stint as a cardiothoracic surgeon in Philadelphia, the doctor started performing transplants at Ronald Reagan UCLA Medical Center, which had the largest heart and lung transplant program in the country at the time.

He then joined his mentor to help restructure the transplant program at Temple University Hospital in Philadelphia before joining the staff at Newark Beth Israel.

As the only lung transplant program in New Jersey, Newark Beth Israel receives all referrals for the procedure, which is how Moyet made his way there.

Gomez-Abraham recalled some of their first meetings.

“He told me that he has a 14-year-old daughter who he wanted to see graduate from high school and go to college,” Gomez-Abraham said. “He wanted to see her family grow and to grow with them.”

“Mr. Moyet, I have a set of lungs for you,” he remembers the caller saying. “They are 40 years younger than you are. Will you accept them?”

The answer was easy.

“Yes, of course I’ll accept them,” he replied.

“Okay, we’ve called Newark Beth Israel. They’re expecting you,” Moyet remembers the caller saying. “You have an hour. Do what you need to do and report to the hospital.”

Moyet ended the call, went to take a shower and cried.

“On the Fourth of July, I was giving a new lease on life,” Moyet said. “Some young kid died to save my life.”

Moyet was up and walking in a matter of days, and doctors say he’ll get to see his daughter graduate and more. He and his wife take strolls through the park, and Moyet said he’s looking forward to running again.

He also is eager to continue helping others, especially those who suffer from similar conditions.

“I hope to help as many people as I can,” Moyet said. “Everybody helped me. Now it’s my turn to help everyone else.”

Gomez-Abraham said all transplant cases are special, but he admits Moyet’s story impacted him a little bit more.

“Every individual is different, and it’s a joy to see every single one,” he said. “But, in Mr. Moyet’s case, obviously, it creates that special meaning because we were able to help him after all that he’s done for others.”

For NJII and NJIT, sale of BioCentriq for $73M is ultimate...

Horizon’s effort to change will benefit millions of New Jerseyans