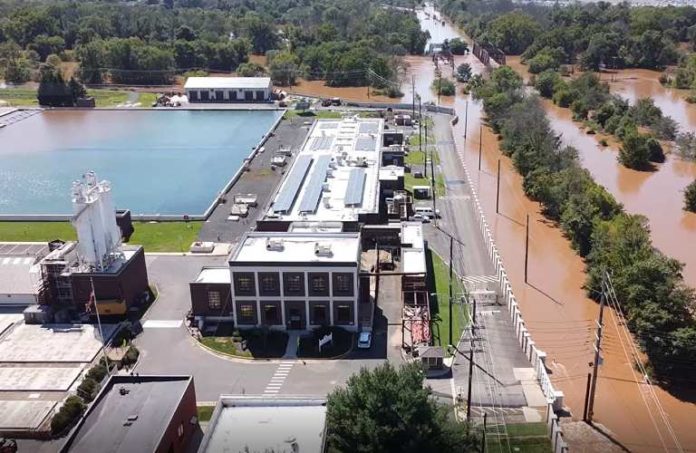 It’s a view that comes after the utility saw the added height of resistance it put around its all-important Raritan-Millstone water treatment plant in Bridgewater hold up this week during the flooding caused by the remnants of Tropical Storm Ida.

The treatment center, which regularly pushes out up to 150 million gallons of water a day — and can handle up to 200 gallons — was not impacted by Ida.

McDonough said the effort to raise the flood wall from 44 to 48 feet — a $37 million project that was completed in 2018 — paid off this week.

“Ida would have breached the wall had we not done this,” he said.

McDonough, however, said the company is not taking a victory lap. The event has only reinforced the idea that flood lines no longer are relevant, he said.

“We had input from the Army Corps of Engineers,” he said. “They said going from 44 to 48 feet would be a 500-year flood line. Well, it took Mother Nature about three years to go above 44 feet.

“I hate to use the phrase, ‘the new normal,’ but there’s a new level of constant vigilance that’s going to be required now. We really need to be prep for everything. I’ve already told my engineers, ‘Let’s go back to the Army Corps.’”

McDonough, who was elevated to president in April, said this week’s events showed the need for a new way of thinking moving forward. And McDonough is not the only one thinking that way.

“This morning, at a New Jersey Utilities Association meeting, (Board of Public Utilities) President (Joe) Fiordaliso said, ‘We’re in a race — and it’s not just the race of trying to reverse climate change, but it’s a race to be prepared for all the outcomes that are coming,’” McDonough said.

McDonough said he was thankful the Raritan-Millstone treatment center was unscathed by the storm. Had it not been, he said, the human cost may have been greater than the financial cost.

“It’s not just that we kept the integrity of the plant, but that we continued to push out hundreds of millions of gallons of water,” he said. “And we did it with terrible water quality outside the gate.

“In a situation like Ida, the misery factor is high. If we have to go to people and say, ‘You have to boil your water’ or ‘You can’t use your water at all,’ that’s not good.”

Of course, the irony or dark humor is this: a water company struggling to handle water.

“We have video of the water rushing by. It’s really quite frightening when we think about the power and nature of water.”

McDonough touched on a number of issues. Here is more of the conversation:

ROI-NJ: Talk about Ida. What made it different from other storms?

Mark McDonough: Ida was a very nontraditional storm. It was the remnants of a tropical storm coming from a different direction. We try to prepare the same for everything, but it was unbelievable how much water and how much rain can come out of these storms in a very short period of time.

ROI: How did that impact your preparation?

MM: We had rolled out our response plan and had set up a crew of folks to come into the plant, but the rain fell so fast that we ended up leaving a different crew in the plant. We couldn’t get our folks into the plant fast enough.

It was a big lesson for us. Now we can say, ‘Don’t assume you have time now.’ We’ll spend some time with our experts back at big corporate to work on the idea, ‘What should be our expectation from a band of rain now?’

MM: Not necessarily. You have to look at it this way — and this happens at a lot of surface water plants, which take water off of rivers or large estuaries. They generally sit very low in terms of their vulnerability to water. So, we’ve always planned for the idea of flooding. We had a 44-foot flood wall, but the area coming up to the plant eats much of that 44 feet.

You have a variety of sort of approaches. On one side, we have natural land berms. On another side, we literally have a concrete wall with a sealed gate that we can drop down a little bit like a submarine door.

ROI: Talk about the finances of doing this?

MM: We spent $37 million on those upgrades. We spend $400 million a year, so, in some regard, it wasn’t an overwhelming amount of money, but it really is a significant investment. And it adds to the level of things we have to invest in.

We’re always thinking about recapitalization among all the things we have to do. Now, we have to add this bucket — one that’s strictly for nature.

ROI: This, of course, comes at a time when New Jersey American Water already is spending hundreds of millions to replace existing pipes. How does this impact that?

MM: It reaffirms what we’re doing. Because the other piece of this puzzle is not just what happened inside the gates, in the fact that we kept the water outside, but the system resiliency. When you get areas overtaken by that much water, the pipes are so important.

The integrity of taking that clean water out and delivering it to the endpoint is hugely important. So that constant need for recapitalization is really just validated by this.

ROI: What does the state need to do to prepare for the next big storm?

MM: In my mind, this is really one more cautionary tale for consolidation and regionalization of water and wastewater operations, because this just becomes one more thing that towns can’t handle.

We’re able to because of our size and our expertise. But I needed internal and external experts, I needed resilient pipes and I needed a massive flood wall to get through what was the remnants of a tropical storm. Wait ’til the next Sandy comes.