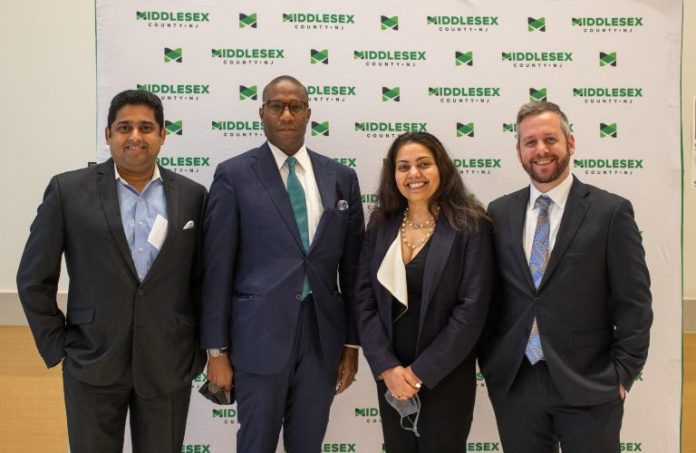 As local New Jersey businesses consider, grapple with and aim to implement the new Fourth Industrial Revolution, or 4IR — which focuses on increasing, actionable data and automation — they must remain both grounded and forward-thinking, according to a panel discussion held last week by Middlesex County.

This powerfully disruptive change to business models — one driven by 5G technology, data management and communications — is “already here” and is “moving forward” through the work of local officials, fresh innovation and global technologists, the panelists said.

The Fourth Industrial Revolution is blurring the lines between the physical, digital and biological spheres. It is a fusion of advances in artificial intelligence, robotics, the Internet of Things, 3D printing, genetic engineering, quantum computing and other technologies. It is the collective force behind many products and services that are fast becoming indispensable to modern life.

“Leading Locally in the Fourth Industrial Revolution: The Future of Automation” was presented by Middlesex County as part of its three-part business series.

The key, the panelists said, is adopting the proper mindset.

“Companies must be willing to try things that won’t necessarily fail, but will be done despite them not knowing all the answers,” Kaplan said.

That mindset is the challenge that many governments have in helping to make this happen, Kaplan said, and this kind of experimentation “will only happen as fast as we’re willing to let it happen,” he said.

One example of this innovation was described when the panel was asked about a timeline for when cities will experience self-driving cars.

“The technology is already here,” Sharma said. “We’re testing it now. It takes time to work through the experimentation so we can be sure that we can support it. Think of it like when you were teaching your teenagers how to drive. It will happen slowly, not overnight.”

Kaplan said it will likely be introduced with closed roadways. Sharma said that testing would come via shuttle services.

“Of course, it begins by addressing life safety concerns, but these are the kind of calculated risks that companies and governments will need to take,” Kaplan said.

Iyer, whose background is in startup companies and whose current company focuses on renewable energy, was asked what small to midsized companies can do to prepare for this coming industry revolution.

“Don’t think of yourself as a small business,” he said. “Microsoft, Amazon and PayPal, for example, didn’t start out as giant companies. Opportunities are happening all of the time, it’s just a matter of seeing those opportunities. Look what happened with Zoom during the COVID-19 lockdowns.

“Keep in mind, the kinds of challenges you are having are happening at companies of all sizes — just at different levels of magnitude. They are dealing with the same things you are.”

Solomon said Middlesex County is doing all it can to help make these opportunities more visible. He also mentioned an ongoing pilot program the county is doing regarding studying pedestrian traffic data at intersections in New Brunswick, and how students there interact with those patterns.

Local business partnerships are vital to a successful integration of 4IR.

Sharma said that no company — including Verizon — can do this on its own.

“We created the network (5G) that will move this (4IR) forward, and now is not the time to pause when it comes to enabling this next generation of technology,” she said. “But we need partners — developed by reaching out to local businesses — finding stakeholders who will collaborate with us. We want to be able to create solutions that can happen locally and be replicated throughout the state and even nationally.”

The panel discussed sources from which qualified 4IR workers will be found.

Kaplan said it’s not always going to come from those with college degrees, mentioning a friend of his who is an engineer at Netflix who works on machine learning capabilities.

“He’s only in his 20s; he grew up studying coding languages and databases for video games. He worked on creating video games from his home. It was an action/reward loop for him — something he liked to do. Now, he’s making $400,000 a year and never went to college.”

“Companies and their people need to figure out how to put all of this together to enable 4IR,” he said.

“It’s what helps us to communicate with each other,” he said. “For a long time, it was done through paper and pencil, and anyone who was educated could benefit from it.

“Today, data is ubiquitous. You need to do the work to interpret it and use the tools available to put it in a central location for all. You can ask, ‘Should I do it manually, and work out the kinks?’ Yes. Just remember what you learned from first using a calculator: Don’t enter anything into the calculator that you can’t also do by hand.”

As Iyer put it, “All data is available to everyone, everywhere.”

And it’s a huge part of all of these disruptive business models — “and it’s all happening during times of crisis,” Iyer said, pointing to climate change and the pandemic.

Said Sharma: “The worst thing about the pandemic was that, for much of it, it put us in a place of isolation. But the world was able to move forward because of connections people could have through technology. And having the opportunity to use that technology didn’t take four or five years — it happened overnight.”

As for the 5G network’s role in the future, she said: “When people first learned of 5G’s tremendous capabilities several years ago, their first response was, ‘Who could possibly use all of that (bandwidth)?’ Well, here we are. It will be here for this new economy. We have to keep thinking, ‘What can we do to make the next generation better?’ Business partnerships will drive that, and it’s what we need to deliver on the promises of the 2030 4IR vision.”