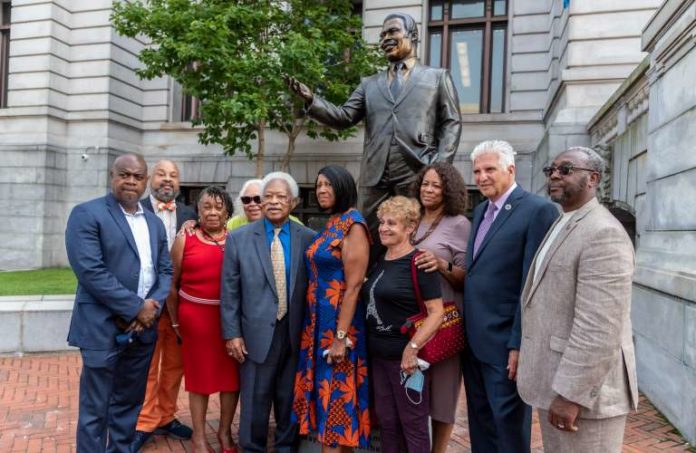 Ras Baraka is the mayor of Newark — he’s also an unofficial historian. So, it made since that Baraka would put the impact and influence of former Mayor Kenneth Gibson into perspective on the day a statue honoring Gibson was unveiled outside of City Hall.

Baraka said he has felt Gibson’s impact on the city throughout his life.

“Mayor Gibson was so special,” he said. “Growing up, I knew of him as an icon and a topic of conversation in my household. I knew why he was important for the city and throughout the country.

“When I became mayor, he graced me with opportunities to have conversations with him, not always about politics, but also about well-being. He’s helped me make my way through my mayorship in the city of Newark and, more than anything, he deserves a statue right here in front of City Hall.”

Gibson, Newark’s first African American mayor, served for 16 years, from 1970-86. He led Newark’s efforts to overcome the physical and spiritual damage inflicted upon the city by the 1967 Rebellion.

Payne said Gibson’s impact on the city’s residents was substantial.

“I remember all the good he did for the health of Newark’s residents, especially children,” he said. “Under his leadership, rates of tuberculosis and infant mortality dropped significantly.”

Oliver remembered Gibson’s impact on her.

“His leadership inspired me to pursue a career in public service,” she said. “After college, he opened new doors for me with a position in his administration during a tumultuous time in Newark history.

“He inspired and encouraged me and gave me a platform to fight for the many injustices I recognized and felt passionate about as a youth — social and economic inequalities such as fair housing, equal employment opportunity and public health.”

Of course, for some, Gibson was known as “Dad.” His daughter, Cheryl Gibson, said it was a special moment.

“On behalf of the family, my sisters and I, this moment makes us so proud, because we know what the city of Newark meant to our father,” she said. “We know that he loved this city, and we believe that this is exactly where he should be remembered.”

“Wherever America’s cities are going, Newark will get there first,” he said.

Energy bill signings are about more than just nuclear subsidy