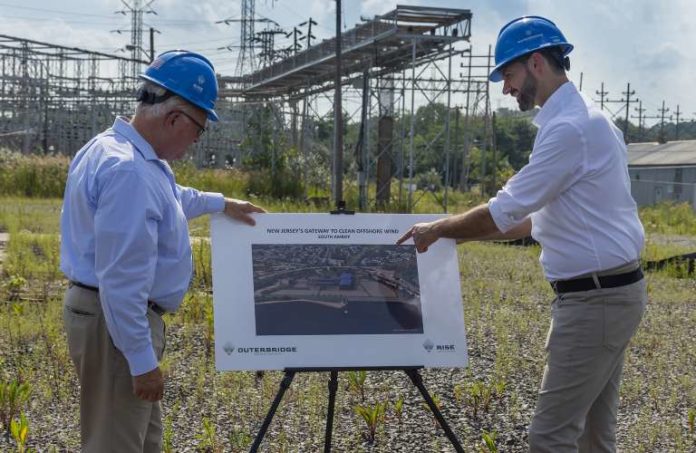 Rise Light & Power announced Friday that it is planning to build the Outerbridge Renewable Connector — an innovative renewable energy hub that will help streamline the delivery of renewable offshore wind energy to New Jersey homes and businesses — on a former brownfield site it has acquired in South Amboy.

Rise Light & Power, a Queens, New York-based subsidiary of LS Power, said the project aims to serve as a central interconnection point for offshore wind farms to deliver clean energy to the New Jersey electric grid — one that could power 1.4 million homes with offshore wind while avoiding need to bury high-voltage power cables under the beaches on the Shore.

Rise officials said the project is expected to create over $1 billion in economic value in the state, including nearly $88 million in tax revenue for state and local governments.

Rise submitted the proposal to the New Jersey Board of Public Utilities and PJM Interconnection on Friday. The approval process on the request would take approximately 4-6 months.

“Gov. (Phil) Murphy positioned New Jersey as a leader in transitioning to clean energy, and we are proud to play an integral part in his goal for the state to obtain 50% of its power from clean sources by 2030,” he said. “The Outerbridge Renewable Connector is the only project in our state that can deliver clean offshore wind to our residents without the controversy of disturbing beaches and communities.

“Outerbridge is also a major economic generator for South Amboy that will create good-paying local jobs and support our community as a major taxpayer. This is the kind of partner and project South Amboy is proud to endorse.”

The 26-acre, industrially zoned site was retired as a fossil-fuel power plant in 2015. The site on Raritan Bay features an existing substation and switchyard, rail and highway access, a pier with expansion potential and unobstructed access to the Atlantic Ocean with 24 acres of submerged lands.

Once offshore wind energy is delivered to the new clean energy hub at South Amboy, Outerbridge would function as a giant extension cord, delivering clean energy to the local power grid through upgraded grid infrastructure on the site and to the Deans Substation through buried cables along an existing railroad right of way. The power cables will be entirely underground. A proposed battery energy storage system offers the opportunity for further reliability to the grid.

Rise officials said the Outerbridge Project presents the BPU with:

Rise officials said they are committed to extensive, ongoing communication with residents, local officials, labor, business, environmental advocates, environmental justice organizations, fishing industry and other stakeholders to seek input and guidance during development of the project.

“New Jersey has a nation-leading offshore wind program,” said Joe Esteves and David Nanus, the co-heads of private equity at LS Power. “Our Outerbridge proposal allows the state to achieve its offshore wind goals on schedule, cost-effectively and with the highest possible levels of public support. And it will demonstrate how a legacy power plant site can be transformed into a hub of clean energy.”

CBRE’s Jeff Dunne and Jeremy Neuer led the site evaluation and arranged the acquisition of the 50-acre site. The sales price was not disclosed.

At PSE&G, energy efficiency programs are vehicles for job placement

Plan to auction off 480K acres of N.J./N.Y. coast is another boost for offshore wind