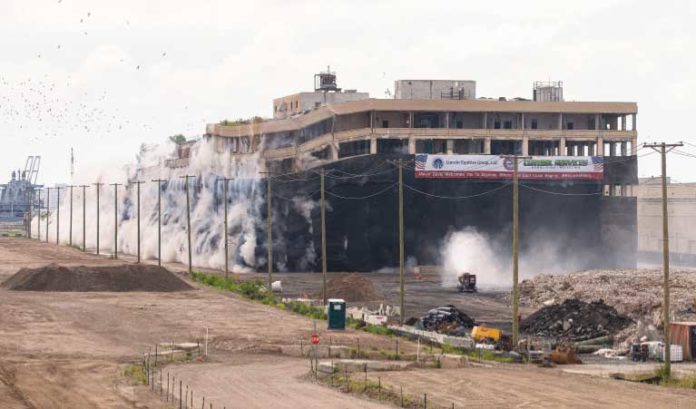 Lincoln Equities Group, which is developing the Lincoln Logistics Bayonne property at the former Military Ocean Terminal, imploded the last remaining buildings at the site earlier this month.

The two, six-story buildings totaled 1.5 million square feet and dated back to the 1940s. The site will eventually house an 888,256-square-foot UPS regional hub facility, estimated to create over 1,000 jobs when completed by 2023. It will be the major part of a 1.4 million-square-foot logistics complex on the site.

“Since purchasing the massive site in 2018, our crews have worked steadily to ready it for construction, which involved importing over 1 million tons of clean fill to raise the site out of the flood plain, and demolishing multiple former U.S. military buildings,” LEG President Joel Bergstein said in a prepared statement. “Now, construction can begin on the 1.4 million-square-foot logistics complex that will create thousands of jobs and play a vital role in expanding the local overall economy.

The two buildings at the MOTBY site were built to withstand a bomb blast, and had to have their bomb-proof panels removed before the implosion. An implosion in 2018 took down a 175-foot smokestack and 150-foot steel water tower on the site.