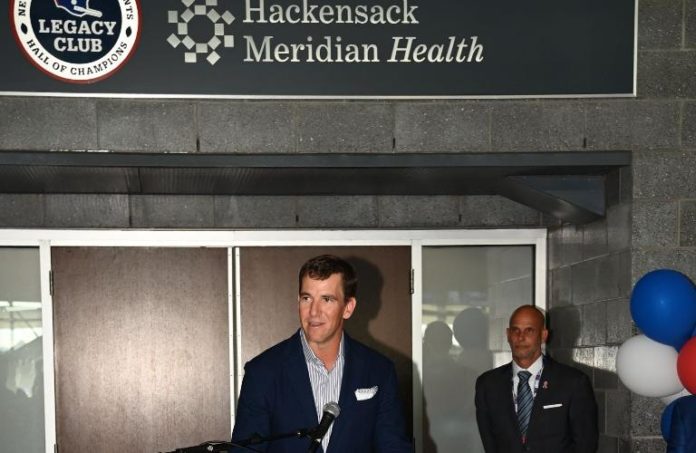 Former New York Giants quarterback Eli Manning has worked closely with Hackensack Meridian Health for more than six years, starting with the launch of Tackle Kids Cancer — a philanthropic initiative of Manning, HMH and the Giants dedicated to raising funds in search of a cure for pediatric cancer.

Manning’s various efforts have helped HMH raise more than $12 million — and helped Manning earn the prestigious Walter Payton Man of the Year award from the NFL in 2016.

Manning, a two-time Super Bowl champion, has since retired from the Giants, but his efforts to support HMH have continued. This week, HMH announced Manning has become a member of the Hackensack Meridian Health board of trustees.

Manning, who has pledged to match and inspire those efforts, regularly visits the children battling cancer.

The Tackle Kids Cancer footprint has significantly expanded since its launch, and, today, National Tackle Kids Cancer Day is observed Sept. 15 every year to draw attention to the crucial need for fundraising for pediatric cancer.

“Eli Manning is a world-class athlete and philanthropist whose impact on and off the field continues to amaze us,” he said. “We are thrilled to welcome him to the Hackensack Meridian Health board of trustees.

“Eli’s leadership with Tackle Kids Cancer has resulted in raising millions for pediatric cancer patients across our network. We are confident that, as a member of our board, Eli will raise our game to keep getting better for our team members, patients and the communities we serve.”

Frank Fekete, chair of the board of trustees, welcomes additional support from Manning.

“Eli Manning is a tremendous addition to the Hackensack Meridian Health board of trustees,” he said. “His devotion to our patients and the Tackle Kids Cancer initiative continues to be nothing short of remarkable, and we look forward to strengthening our collaboration to transform health care in New Jersey and beyond for today’s patients and future generations.”