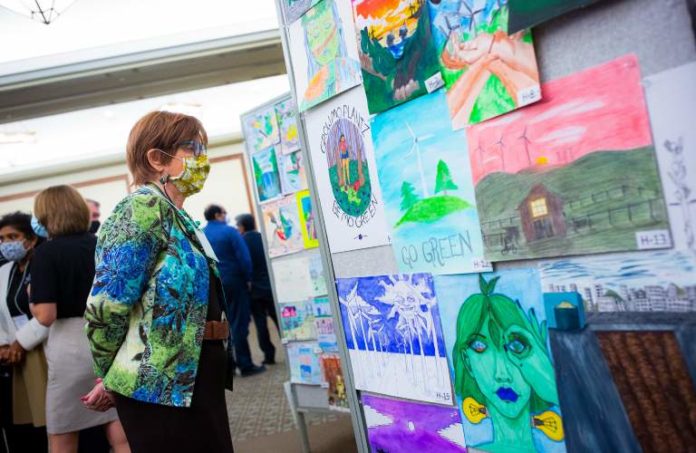 Policymakers and researchers met Thursday for the third annual summit, organized by the Clean Energy and Sustainability Analytics Center at Montclair. The center, founded in 2018, organized the conference to facilitate dialogue between stakeholders in New Jersey’s push for clean, sustainable energy.

“There is nothing more important for our future than dealing with the serious impacts of climate change,” New Jersey Board of Public Utilities President Joseph Fiordaliso said during his keynote address. “We have a moral obligation to future generations.”

Sessions at this year’s conference focused on a range of energy- and climate-related topics, including offshore wind power, new policies on solar power, electric vehicle infrastructure, and energy equity and environmental justice.

Several speakers referenced a recent scientific report from the United Nations Intergovernmental Panel on Climate Change, which warned of increasingly extreme weather across the globe. U.N. Security General António Guterres has described the report as “a code red for humanity.”

“That code red alert is for this decade, not for the next century,” Fiordaliso said. “If we do not act now, and I mean immediately, it will be too late.”

Fiordaliso, in his opening remarks, touted some of the successes of Gov. Phil Murphy’s administration in the shift to clean energy, including the 200-acre New Jersey Wind Port in Lower Alloways Creek Township in Salem County.

He briefly addressed the costs associated with the transition to clean energy and acknowledged that it won’t be cheap. It’s something trade organizations have taken issue with regarding Murphy’s proposed changes to the state’s Energy Master Plan.

“We understand clean energy is expensive, but we also understand the economic enhancements that it brings and will bring to our state,” Fiordaliso said. “If we don’t spend the money, what alternative do we have?”

PSEG’s Linde named board chair of Community Foundation of N.J.