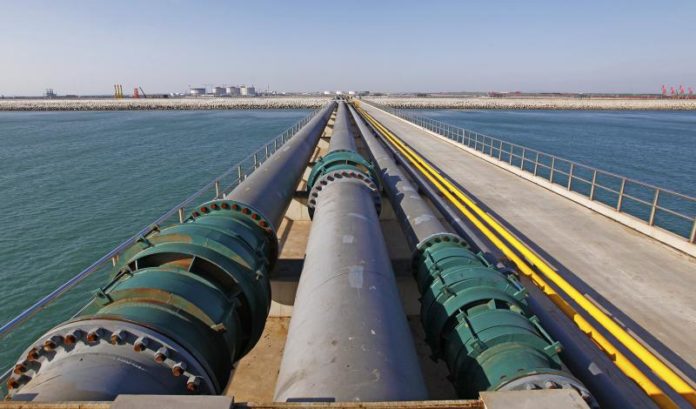 Gov. Phil Murphy said he likes to give all energy projects the benefit of an evaluation, in an effort to see if they will help New Jersey reach Murphy’s goal of a 100% clean energy economy by 2050.

The PennEast pipeline project — a 116-mile natural gas pipeline that would have run from Pennsylvania to New Jersey — was officially dropped Monday by PennEast officials.

Murphy said that was gratifying because he felt the project never made the grade.

“This one was bad,” he said. “It would have wrecked our state. And, as long as I’m here, that’s not going to happen.”

Murphy said he’s willing to listen to all proposals because no one exactly knows the road to clean energy.

“We analyze and assess these projects one at a time,” he said. “We want to make sure we fairly call balls and strikes to make sure all sides are heard. And then, we make decisions.”

Murphy said there are legitimate questions about how states reach their clean energy goals — but that the PennEast project was not a road he wanted to go down.

“This is one that has stuck out since before I was governor as incredibly egregious,” he said. “The need was always questionable, but more importantly, it would have ripped up preserved lands, private lands, some incredibly valuable ecosystems, and done irreparable harm.”

PennEast won a big victory earlier this summer in the U.S. Supreme Court, but Monday, PennEast Officials said the project was off — an outcome they had hinted at last week.

It is unclear what led to the change of plans. PennEast officials talked about permitting problems, but — after going to the Supreme Court — those issues likely weren’t as difficult.

If it had been built, the $1.2 billion pipeline would have carried gas from Pennsylvania to New Jersey, cutting across the Delaware River.

Murphy, however, was pleased by the outcome — saying he was prepared to do anything and everything to stop the project.

“It’s the singular one that I’ve said for a long time … this is one we can’t even think about in this state, and that we would do whatever it took to prevent that from happening,” he said.

The decision was not cheered by everyone.

Mark Longo, director of the Engineers Labor-Employer Cooperative, said the project would have been beneficial to the state — and provided clean energy.

“We are disappointed, although not surprised, to hear that PennEast has decided to cancel the development of this important pipeline project in New Jersey,” he said. “The benefits of the project were clear: It would have provided New Jersey and the entire region with the clean, affordable energy needed to grow our economy.

“However, many policy-makers and special interest groups shamefully fought hard to stop the project and ultimately succeeded, putting the future of our energy infrastructure at risk. Despite this setback, we hope that New Jersey recognizes the need for reliable and inexpensive energy sources as they craft energy policy for the future.”