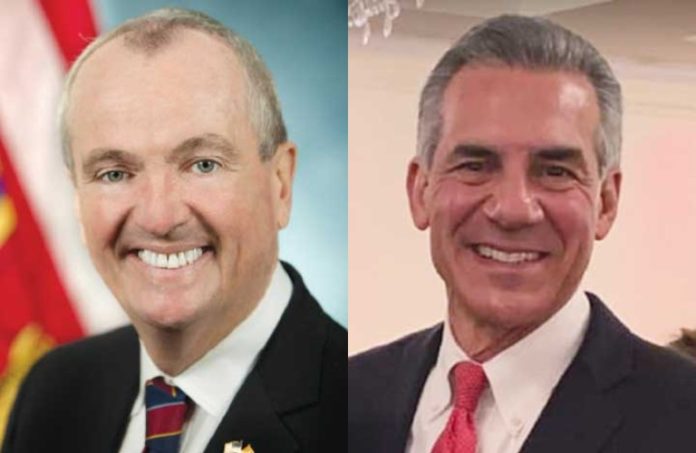 A gubernatorial debate that began awkwardly — Gov. Phil Murphy stood to the side and did not participate in the pre-event on-stage photo shoot — otherwise started predictably.

Republican challenger Jack Ciattarelli attempted to hammer Murphy on COVID-19 fatalities at long-term care facilities and taxes of all types; Murphy responded with numerous attempts that tried to tie Ciattarelli to former President Donald Trump, extreme views and ideas that he said take the state backward, not forward.

And, while there certainly were a few noteworthy lines — raise your hand if you had Ciattarelli making reference to a drinking game in the opening minutes — the back-and-forth did not really get going until more than halfway through the hourlong event at the New Jersey Performing Arts Center in Newark.

Then, it got entertaining.

Ciattarelli stumbled through an answer on his appearance at a “Stop the Steal” rally, and Murphy pounced.

Murphy couldn’t wait to jump in.

“When did ‘No Justice, No Peace’ become controversial?” he asked, to wild applause.

“This rises to the level of disqualifying. C’mon, man. Your picture and name were on the invitation, there’s video — I’ve seen it with my own eyes — of you standing with a ‘Stop the Steal’ sign right by you. There were Confederate flags and white supremacists.”

Murphy said it was the same cocktail that led to the Jan. 6 insurrection — an event on which Ciattarelli  stumbled on the date.

When Ciattarelli failed to turn the conversation with his most common retort — another reference to when the governor said, ‘If taxes are your issue, we’re probably not your state’ — Murphy reminded Ciatterelli that people died during the Jan. 6 event.

Ciattarelli had a solid response: “You mean like the people in the nursing homes and Tropical Storm Ida.”

That may have been the best exchange of the event.

And, if you’re Ciattarelli — behind in the polls and overall recognition — you needed more of them.

Ciattarelli handled being tied to Trump or extreme issues well. He said he felt President Joe Biden won the election, that he did not support the restrictive abortion law in Texas and — while he strongly supports the Second Amendment — he proudly boosted that he was not endorsed by the NRA in his last race for the Assembly.

And, while his efforts on parental choice on vaccines fell flat, Ciattarelli continued to push the idea.

He seemingly scored points when he said parents should be notified if their kids are caught with alcohol or marijuana. And his thoughts that discussions involving sexual identity and race relations should take place at the kitchen table with parents rather than in the classroom with teachers likely resonated well with his core constituents — even though he was ignoring the fact that most kids and parents do not necessarily have those old-school family dinners.

It also led to his best line.

When Murphy said, “Lot going on at your kitchen table,” Ciattarelli snapped back.

“Isn’t that the job of a parent?” he asked. “Apparently, you want to replace the parent.”

Was all of this enough to change any minds? Not likely. Murphy has a double-digit lead in all reputable polls and there was little that happened Tuesday night that seemingly could change that.

The good news for Ciattarelli: It’s not likely that many even watched.

It will set up talking points for their next encounter, Oct. 12 at Rowan University in Glassboro.

As for who won this one? We let the candidates offer their takes.

Murphy was a little more demonstrative.

“There’s no question who won tonight,” he said. “Yours truly.”

In Plainfield, unexpected aid is leading to unprecedented push in economic...