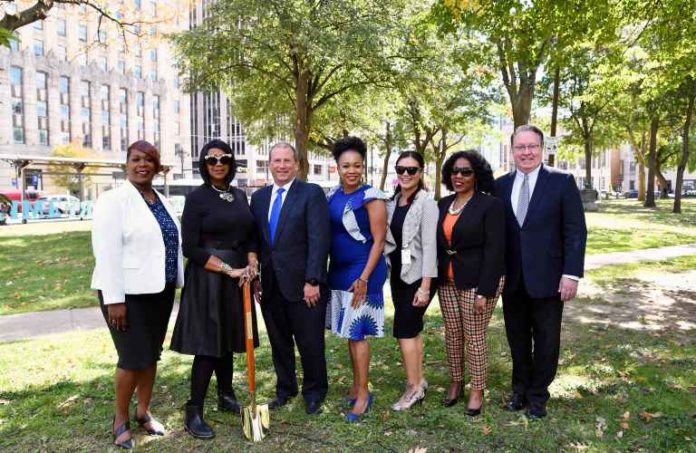 Berkeley College celebrated its 90-year history in New Jersey earlier this week with the planting of commemorative cherry tree in the soon-to-be-renamed Tubman Square in Newark.

The tree, Newark Mayor Ras Baraka said, will stand as a symbol of strength and determination for students at a school that got its start Sept. 28, 1931, in East Orange.

“This tree is actually going to be planted right next to the Tubman monument … that speaks volumes to the mission and vision of the college, making sure that you appeal to a diverse group of people in this city and making sure that they not only come to this school, but they also graduate,” Baraka said.

Officials noted the symbolic importance of the tree’s location, which is positioned across the street from Berkeley College’s Newark campus at 536 Broad St., where the college has operated a campus since 2006.

“I’m proud that (the tree) will stand next to what will become Tubman Square,” Oliver said. “It’s going to give a lot of inspiration to people as they learn the history of Harriet Tubman and then see this tree.”

Oliver, who served as the keynote speaker, also shared her long history with Berkeley College, which she said dates back to 2004, when she was elected to the New Jersey Assembly.

“The marriage of Gov. Phil Murphy and Lt. Gov. Sheila Oliver occurred in the Berkeley College building in Newark,” she said.

“I wanted to introduce this person who was contemplating running for governor to some of the institutions that existed in our community,” she said.

Berkeley College officials said maintaining their presence and connection to the city is a priority.

“Besides our continued focus on student success where the student always comes first, Berkeley College maintains its dedication to being a part of the local community and giving back,” board of trustees Chair Kevin Luing said.

Since it opened in Newark in 2006, more than 1,600 students have earned degrees at the campus.

“We are of this community,” he said. “We take the young people and those who want to reskill and prepare them so that, when they graduate, they are going to be hired.”

Giving back: Subaru to provide school supplies for all K-5 classrooms...

Rutgers expects to soon have on-campus vaccination sites for students