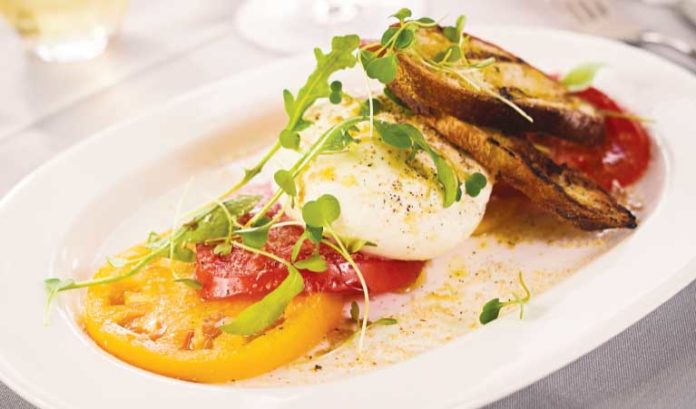 Anthony Frungillo knows all about the legacy and aura of the Highlawn in West Orange. He experienced it firsthand over the course of his lifetime.

“Growing up in Caldwell, we were here for every major event — birthdays, anniversaries, you name it,” he said. “And, as someone who does business in the area, we were always in and out for business dinners and events.”

Frungillo, whose family has been in the food business for generations, said they often joked about being able to own such a prestigious place. When that opportunity arrived — when the pandemic made the Knowles family think about divesting some of its restaurants — the Frungillos jumped at the opportunity.

They came to an agreement to take over the lease on the property this spring.

Thursday, the Frungillo family will relaunch the previously known Highlawn Pavilion as simply the Highlawn.

Frungillo, who will be overseeing the property along with his wife, Jennifer Frungillo, said the family spent the summer months renovating and reinvigorating the property — but doing so in a way that will honor and respect its storied history.

“We know the place holds a very large mystique,” he said. “There’s something magical about it that we love. So, when we redid the building itself, we tried to keep it very true to the architecture and its history.”

The biggest change to the look, he said, will be more white and black features with accents of gold, he said.

Imagine sitting at a bar, hitting a button and having a lift bring you a dozen roses, a bottle of champagne — or even an engagement ring. That can happen at the new-look Highlawn in West Orange.

“We’ve put two lifts into the bar for surprises and celebrations,” Anthony Frungillo said. “You have to pre-rent the seats at the bar — but all you have to do is push the button and the surprise comes up. We think it’s pretty neat.”

“The first thing you’re going to notice is the beautiful chandelier,” he said. “The biggest wow is just how brightened the front room is with all this white marble and white walls and gold accents. And we have our new logo right next to the middle of the floor, which looks pretty dynamic.

“And everything drives your eye out to that beautiful New York City skyline.”

The hiring of Executive Chef Sam Hazen has led to an updated menu. Frungillo said it will follow the concepts of a new American steakhouse — one that also features fresh pasta and seafood.

There also will be cool new drinks, including one called “1,000 Steps” that honors Thomas Edison’s connection to the property. But, more than that, there will be a new vibe — meant to expand the appeal.

“With making the food a little bit more regular with the steakhouse and homemade pasta, fresh seafood, we think we’re already appealing to a different demographic that wasn’t used to coming here,” Frungillo said.

“We wanted add a new atmosphere and vibe after that. So, we’re working on figuring out the music. After the 6 to 7 to 8 to 9 seating, we’re going to bring the energy level up and be able to complement that into a bar crowd that will come for dinner and stay because there’s a lot of life and a great vibe to the building itself.”

Frungillo said the concept also will reach out to families — there will be weekend brunches at a lower price point — and the business community. He said he has been pleasantly surprised at a surge of bookings for corporate events, especially around the holiday season.

The venue, located atop Essex County Eagle Rock Reservation, has begun taking reservations for high-end celebrations, too. It can handle parties of up to 200 inside and out, Frungillo said.

The restaurant, which began a series of soft openings last week, will have a grand opening party Wednesday and be open fully to the public Thursday.

“This is a place with such a rich legacy,” he said. “We’re looking to bring back those days of excitement, when local politicians are next to the people having their anniversary dinners and expand that to people coming here because it’s the best steakhouse in the area.”

The Highlawn once served as a laboratory for Thomas Edison during World War II. Anthony Frungillo wanted to pay homage to that.

When the restaurant reopens this week, it will feature a drink called “1,000 Steps” — a frozen cotton candy creation that is mixed with alcohol.

“When Edison was asked how he invented the lightbulb, he said it took 1,000 steps to get that point,” Frungillo said. “We wanted to honor that. And I guarantee you I’m going to get 1,000 questions about the 1,000 Steps. I can’t wait.”

The cocktail is served in a coupe glass, with a light bulb as a carafe.

Frungillo spoke with ROI-NJ about the Highlawn. Here is more of the conversation.

ROI-NJ: Let’s start with the food. More so, with the hiring of such a well-known and well-respected executive chef, Sam Hazen.

Anthony Frungillo: We’re very fortunate to team up with Sam, who has such an exclusive background. He has worked at two Michelin star restaurants, ran large places, like Tao, and even opened up his own restaurant, which earned a Michelin star.

ROI: How will the menu change?

AF: We think it will be a more approachable menu. We went very new American steakhouse. So, you’ll have a lot of primed, dry-aged meats, but I think it will be a good example of how we’re different, too. The steaks will be prepared on a part-wood, part-charcoal Argentinian grill. And we’ll brush them in a marinate of caper juice, lemon juice and herbs, a mixture of rosemary and thyme.

That approach will bring a lot more subtle flavors to the steak than the traditional steakhouse — and it will go across the menu, everything from his Sicilian Ahi Tuna Crudo to his Australian Wagyu Carpaccio. It’s just a different approach. And it differentiates all the food he makes. (See the menu here.)

It’s an approach to foods that is simple, but complex.

ROI: Any other items you want to highlight?

AF: One of Sam’s favorites is his 24-hour Bolognese, a sauce that literally takes days to produce, starting with the veal and pork being braised for 12 hours.

ROI: You mentioned you’ve seen a strong desire for corporate and high-end events. Talk about what you have in store for those crowds?

AF: We have a couple different spaces that all obviously showcase the skyline. My favorite is the wine cellar basement, which is literally built into the mountain range itself, so when you go down, it feels like something that you would experience on the Amalfi Coast in Italy.

That room seats up to 50 people and is a great place for a private business meeting. And we have several rooms upstairs in our skyline ballroom, where you can host anywhere from 15 to 150, because the room divides into bigger and smaller areas.

We also have a tent that can handle 200 people that shares the same views. It’s really spectacular.

ROI: Business is booming, despite the pandemic?

AF: It really is. We thought we’re going to take small steps, but our books have been filling up fast with people who always loved the space and heard that it was undergoing a revitalization.

ROI: Of course, they knew it as the Highlawn Pavilion. Talk about the name change.

AF: Our strategy is to have different venues within the Highlawn. The main new American restaurant is going to be the Grill Room at the Highlawn. And, while the Highlawn always will have that fine dining, new American cuisine, we’re trying to do a lot with doing brunches on the weekends to make it more accessible to the public.

ROI: It sounds like the word is out, but we’re guessing you have other marketing efforts planned. How are you reaching out to the old — and new — audience?

AF: We have a couple of different ways that we’re going to go about it. We have a campaign that we’re going to be doing for print and social media. And then there’s the traditional way of reaching out to local leaders and inviting them to the grand opening. Of course, we’re hoping word of mouth will do wonders for us, too.

ROI: This has long been known as an Essex County hot spot — how much farther out can you go?

ROI: Tell us more about your family — and how it got to this moment.

AF: Our family’s been in the business since the 1920s with a market in Newark’s First Ward. In 1972, my father opened Frungillo Caterers in Bloomfield. In 1987, he opened Michael Anthony’s Restaurant and Caterers in Verona. Shortly thereafter, he partnered with Ben Aiello and created Gourmet Dining, which has grown into a business that serves 17 schools of higher education in the state. My favorite is Rutgers Stadium.

My brother Michael took over Gourmet Caterers a few years ago and myself and my wife, Jennifer, will lead the partnership group that oversees the Highlawn.

ROI: That’s incredible story. And to think, after all that, you were able to take over your favorite restaurant. Most people dream of just having a reserved table — you got the whole place. Put that in perspective.

AF: (Laughing) Our family is so big, we needed the whole place.

Survey finds business is up at restaurants — but profits are...