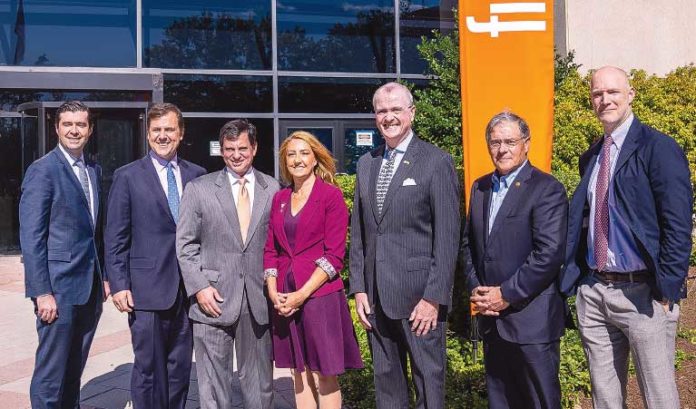 It’s obvious that the announcement that Fiserv is expanding its New Jersey presence with a 3,000-employee hub in Berkeley Heights was great for the state’s overall economy and its tech scene.

Its bigger impact could be this: The move could signal a revitalization of the state’s enormous suburban office park market.

Trying to find new uses for the state’s believed-to-be obsolete corporate parks has been a goal for some time, one many had thought was out of date. After all, who figured Berkeley Heights — not Jersey City, Newark or even the Princeton/Route 1 corridor — would be the destination for high-tech Fortune 500 company?

“When we looked at our population of people that weren’t in New York City, Berkeley Heights was an almost a perfect center pin drop for those people we already had,” Fiserv Chief Operating Officer Guy Chiarello said.

Fiserv, Chiarello said, has long favored suburban locations. The company — get this — feels it adds to its ability to attract and retain workers. And Chiarello isn’t hesitant to say that feeling only has grown since COVID-19 took over the world.

“We knew, as we tested our own internal markets, that we could recruit people from different locations into that location,” he said. “Honestly, post-pandemic, we feel there is a psychology of quality of life and quality of environment that goes with this.

“So, it’s really a convergence of many things coming together, but I do believe the pandemic has had some psychological effect on our employees wanting this option.”

Tim Sullivan, the CEO of the New Jersey Economic Development Authority, and Jose Lozano, the CEO of Choose New Jersey, helped bring Fiserv to the state. And they both are leading Gov. Phil Murphy’s administration’s efforts to build the economy everywhere, not just in urban transit hubs.

Sullivan said Fiserv’s preferred destination is hugely important — but he said the decision of HAX, a global accelerator that announced it is coming to Newark, is important, too. This is not a one-place-fits-all future.

“Suburban real estate certainly has a new lease on life,” Sullivan said. “You have companies like Fiserv that are thinking about wanting to have more space, a little more control over their own real estate, in terms of being one of the only tenants in a building — or the only tenant.”

That doesn’t mean the drive to urban hubs is over, Sullivan said.

“I think there’s a good compare and contrast here,” he said. “HAX really wanted to be downtown. They want walkable, they want train access, they expect a lot of their founders are going to be people who don’t like driving to work every day, they like to walk or bike or take the train. And that’s great.

“Both of those things are good for Jersey, because we’ve got tons of suburban real estate that could use tenants.”

So much so that the EDA launched the 21st Century Redevelopment Program earlier this year in an effort to help municipalities create plans to redevelop, repurpose or regreen stranded assets — including vacant and underutilized retail or office complexes.

Last month, the program awarded eight $50,000 grants for this purpose.

The idea of a tech hub coming to Union County is not unprecedented. After all, Bell Labs has long made its home in Murray Hill, an unincorporated community that straddles both Berkeley Heights and New Providence.

But that doesn’t mean the Fiserv announcement came by happenstance. Berkeley Heights took steps to reach this moment.

The announcement is just what Berkeley Heights officials had in mind last spring when it gave rezoning approval to the Connell Co. for a $400 million redevelopment of the Park, a 185-acre work-life campus that Connell officials say will deliver wellness and concierge services across flexible workspaces, experiential dining, fitness amenities — and residential offerings. More than 300 apartments are planned for the area.

“With the Park, we’re doubling down on that commitment to the local community — and the regional workforce at large — with the introduction of publicly accessible parkland; a mixed-use residential and experiential retail district; and a host of unique hospitality-inspired amenities that promote wellness, fitness and the work-from-anywhere experience,” Executive Vice President Shane Connell said then.

“Today, Berkeley Heights is gaining another strong partner,” she said. “I look forward to Fiserv becoming an instrumental piece of the fabric of our community.”

The bigger question: Will it spur more moves to more suburban locations?

“Wherever you had suburban real estate marked in your mind as to how attractive it is, it’s a lot more so, now,” he said.