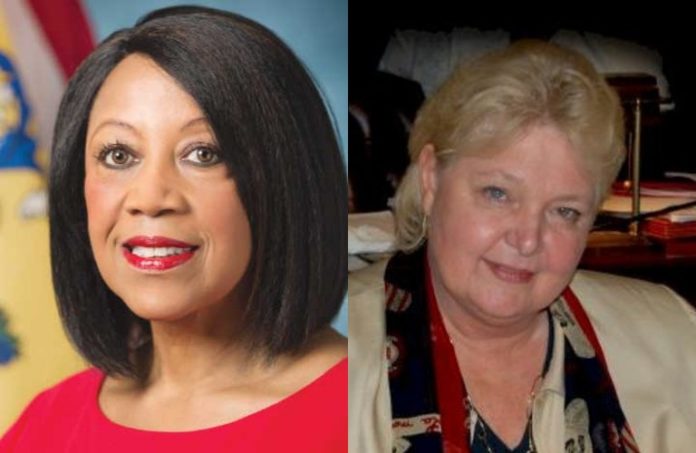 If you were looking for fireworks, you didn’t get them Tuesday night during the New Jersey lieutenant governor debate at Rider University.

How many were looking? That’s unclear. The debate between Lt. Gov. Sheila Oliver and former state Sen. Diane Allen seemingly only attracted a few hundred on the social media channels we checked.

The event, put on by the New Jersey Globe, was not televised.

The candidates, both seated throughout, stated their positions — which essentially mirrored those of their party’s gubernatorial nominee. The debate did not appear to produce any moment that would change the mind of a voter.

The biggest agreement: Both support a women’s right to choose.

Both candidates were asked how the state can afford universal pre-K, prepare for climate change and fund the pension system without raising taxes, as both gubernatorial candidates have said they will not do.

“Building an innovative economy for the future of New Jersey will lead us to expanding our revenue base,” she said.

Allen said the current administration’s revenue plan does not add up.

“I think that the concept of creating more revenue is good,” she said. “The problem is, every time we turn around, we see a new tax on business, and we see businesses leaving the state. And we aren’t going to have more revenue if we don’t have more businesses and more jobs. It’s a big concern.”

She said she also doesn’t believe Murphy’s no-tax pledge, pointing to last Friday, when businesses began getting hit with what eventually will be a more than billion-dollar bill to replenish the state’s unemployment system.

“Gov. Phil Murphy said last Tuesday that he was not going to raise any taxes for the next four years,” she said. “It was Tuesday, and on Friday, he raised the taxes $250 million on businesses.”

Oliver: When workers became infected with the (COVID-19) virus, we had to immediately close offices down, because we have the threat of spreading it to people coming in. No one is happy that motor vehicles got (closed down); nobody is happy that appointments could not be made. But we had to be concerned about the health of the general public.

(Note: There was no follow-up on why a case in a grocery store or a big-box store did not result in that facility being shut down.)

Allen: Why weren’t we set up so that, if they had to go home, they could work from home? That’s what so many other businesses did. But instead, they just closed it down.

(Allen cited a University of Chicago study that said New Jersey was one of the worst states when it came to getting help on the phone.)

We need to be able to have government serve the people.

Allen: The problem is that, even though New Jersey has the strictest gun laws in the country, that doesn’t seem to make a difference when it comes to illegal guns.

Oliver: Concealed carry is wrong for New Jersey, people in New Jersey do not want such a law. … Why in the world would we have a law in New Jersey that I could walk into the Starbucks or the McDonald’s and the guy next to me has a weapon?

Oliver: I believe it will happen. I know the internal workings of both the Assembly and the Senate. I know where people stand on this issue. There is no question in my mind that Senate leadership and Assembly leadership and their caucuses and, subsequently, their entire memberships will move toward voting affirmatively for the reproductive freedom act that has been proposed. There is no turning back as it relates to Roe v. Wade.

Now. I am certainly not against overturning Roe v. Wade. I think a woman does have a right to choose. But I think there’s a point where we have to look at it from the standpoint of, ‘Does it go all the way up to the end’ — or is it something that we need to think about, as it has been, in New Jersey.

On whom they are as a candidate

Allen, when asked if she has moved to the right as a candidate: I think if you’ve listened to my answers so far, you think ‘no.’ And, in fact, I haven’t. I’m still that person who voted for gay marriage, long before President (Barack) Obama even backed it. I’m still that person who decided to work with Garden State Equality, so that we could get a really strong antibullying bill so that everybody was protected in school. I’m still that person who worked to get insurance companies to cover women’s contraceptives, because I found out that the insurance companies were paying for Viagra, but not paying for contraceptives. I didn’t think that was fair. … I would say that socially moderate is probably exactly where I am.

Oliver, when asked if she was ‘in the room’ when big decisions were made: I am in the room, and I am able to influence things, I can pick up a phone and call Sen. (Steve) Sweeney on an issue and get cooperation. I can do the same thing with Craig Coughlin, our Speaker, so I am in the room. … People will ask: Why don’t we see more often. That’s because I’m at the desk doing the work. I don’t have to be in the room all the time, I can exert influence on outcomes that happen in Trenton without having to necessarily always be there. But I am in the room with leadership.

Allen: I guess the bottom line for me is that New Jersey is broken. And I think the reason it’s broken is because I don’t think this administration … cares enough about the people of New Jersey. (She cited examples of returning seniors with COVID to nursing homes, shuttering small businesses while big-box stores stayed open and getting unemployment checks out faster.)

But taxes is the big issue. And of course, Gov. Murphy said if taxes are your issue, this may not be your state. Well, here’s the deal: It is my issue. And this is my state, and it’s your state as well. Jack Ciattarelli and I will take back New Jersey for all of us with your support.

Oliver: This election is about moving New Jersey forward and not going backwards, progressively. In the Murphy-Oliver administration, we can walk and chew gum at the same time. We can focus in on investments in education and health care and make certain that our small businesses can thrive. We can invest in local economies, as we do through my department (Community Affairs), and others with the neighborhood preservation program. … We are going to move New Jersey forward, include everyone, and not perpetuate divisiveness in the state of New Jersey.

Why Evergreen Fund sets N.J. apart — and could set up...