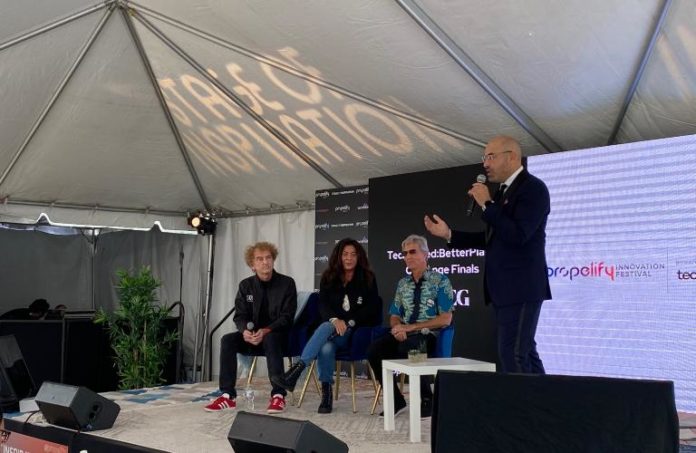 Aaron Price wasn’t afraid to admit it: He had been sweating the details of Propelify 2021 for weeks. More than that, actually.

“I’ve been nervous for about a year,” he said.

Or, since the pandemic forced Propelify — like every other event — to go virtual a year ago. Price, the CEO of TechUnited: New Jersey and the founder of Propelify, said he didn’t know if the interest would return when the event returned to an in-person format.

Price said he didn’t know if the tech community in New Jersey — seemingly on a roll in recent weeks — would demonstrate that during the one-day event in Hoboken.

On Wednesday, he got his answers. A beautiful day (which hasn’t always been the case for Propelify) combined with top speakers (Sean O’Sullivan, the head of SOSV, perhaps the biggest) made for a strong event.

“Each year we’ve been doing this, momentum has been building,” Price said near the end of the day. “To do this well now, after we had to skip an in-person year because of the pandemic, just reinforces the energy that’s happening in New Jersey.

“We can attract from other regions, like New York and Philly — and a bunch of other international locations. We don’t do this because of New Jersey. But the benefit to the region is something we’re very proud of.”

The tech sector in the state looks strong. O’Sullivan, who is bringing his hard-tech accelerator, HAX, to Newark, said as much. That announcement — coupled with the news that Fortune 500 company Fiserv is going to create a tech hub of 3,000 people in Berkeley Heights — have been a huge plus for the sector.

“I think the state of the state of tech is that it’s alive and well and growing,” Price said. “We’re getting to a critical mass, so that it’s not just a few isolated organizations and events, but a true community that wants to see one another succeed.

“I love HAX and Fiserv. But I want to see 100 of those type of companies here.”

“We’ve got the backing of the right organizations,” he said. “We’ve got big companies like PSEG, Robert Wood Johnson, Verizon and Cross River around the TechUnited table.

“We’ve got the ear and the support of the governor and the EDA. So, it does feel like there’s an explosion happening. And I think you’ll see multiple pings on this graph, as it keeps growing.”

Price said he hopes the early makings of the next big announcement started at Propelify.

“We want to be organization that is a leader in bringing together the tech world,” he said. “That’s what this is about. I’ve said it 1,000 times: we want to help propel ideas into action. And the chance to be able to do that in person again, when we get to hear about how so many people are connecting with so many companies and investors, is very thrilling. It feels as if we are maturing as an organization.

“This is a very emotional day. We’re still a relatively very small team doing a lot more than probably a team of this size should be doing.

“And it’s great to be back doing this in person.”

Even if it is a little nerve-wracking.