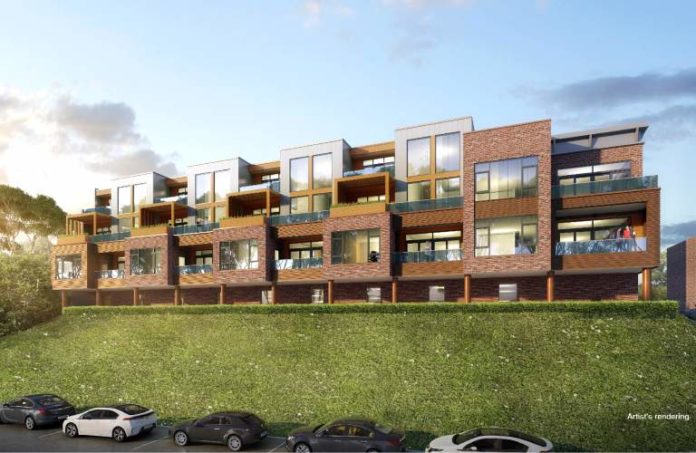 Denholtz Properties has broken ground on a new luxury waterfront condominium project in Red Bank, the developer announced this week.

Denholtz executives were joined by officials from its partners, as well as Red Bank Mayor Pasquale Menna for the ceremony commemorating Southbank at the Navesink. The project, at 4 Boat Club Court, is slated to be four stories and include 10 two- or three-bedroom units, with completion estimated for the fourth quarter of 2022.

Denholtz Properties acquired the Boat Club Court site in 2020, after years of failed development projects on the site, it said.

“Since moving our headquarters to Red Bank in 2019, we have sought to make a positive and lasting impact on the borough through visionary real estate projects such as Southbank at the Navesink,” CEO Steven Denholtz said in a prepared statement. “Although this property has proved difficult to redevelop in the past, we knew its location, paired with our experience, would allow us to create something truly unique.

“We are excited to celebrate this milestone with the Red Bank community, and look forward to bringing this project to life over the next year.”

The firm said six of the planned units will include single-floor layouts ranging from 2,142-2,496 square feet, while the four duplex penthouses will feature more than 2,935 square feet of space.

Deborah James of Heritage House Sotheby’s International Realty has been chosen as the exclusive Realtor for the project.

Denholtz Properties relocated its headquarters to a 30,000-square-foot office building at 116 Chestnut St. in 2019, and is working on the 57-unit, mixed-use Rail at Red Bank next door.